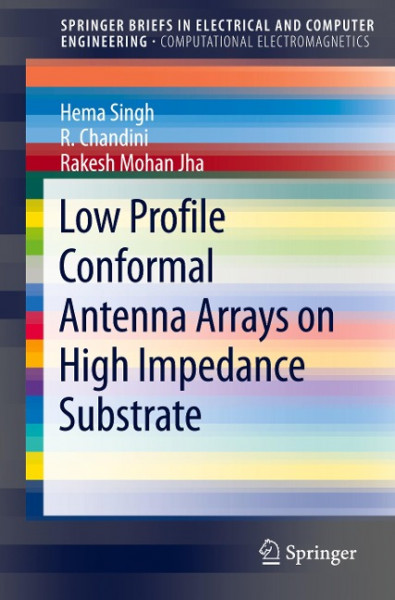 This book presents electromagnetic (EM) design and analysis of dipole antenna array over high impedance substrate (HIS). HIS is a preferred substrate for low-profile antenna design, owing to its unique boundary conditions. Such substrates permit radiating elements to be printed on them without any disturbance in the radiation characteristics. Moreover HIS provides improved impedance matching, enhanced bandwidth, and increased broadside directivity owing to total reflection from the reactive surface and high input impedance. This book considers different configurations of HIS for array design on planar and non-planar high-impedance surfaces. Results are presented for cylindrical dipole, printed dipole, and folded dipole over single- and double-layered square-patch-based HIS and dogbone-based HIS. The performance of antenna arrays is analyzed in terms of performance parameters such as return loss and radiation pattern. The design presented shows acceptable return loss and mainlobe gain of radiation pattern. This book provides an insight to EM design and analysis of conformal arrays. This book serves as an introduction for beginners in the design and analysis of HIS-based antenna arrays. It includes pictorial description of both planar and non-planar array design and the detailed discussion of the performance analysis of HIS-based planar and non-planar antenna array. It will prove useful to researchers and professionals, alike. von Singh, Hema und Chandini, R. und Jha, Rakesh Moha

Dr. Hema Singh is currently working as Senior Scientist in Centre for Electromagnetics of CSIR-National Aerospace Laboratories, Bangalore, India. Earlier, she was Lecturer in EEE, BITS, Pilani, India during 2001-2004. She obtained her Ph.D. degree in Electronics Engineering from IIT-BHU, Varanasi India in 2000. Her active area of research is Computational Electromagnetics for Aerospace Applications. More specifically, the topics she has contributed to, are GTD/UTD, EM analysis of propagation in an indoor environment, Phased Arrays, Conformal Antennas, Radar Cross Section (RCS) Studies including Active RCS Reduction. She received Best Woman Scientist Award in CSIR-NAL, Bangalore for period of 2007-2008 for her contribution in area of phased antenna array, adaptive arrays, and active RCS reduction. Dr. Singh has co-authored one book, one book chapter, and over 120 scientific research papers and technical reports.Ms. Chandini R. obtained her BE (ECE) degree from Visvesvaraya Technological University, Karnataka. She was a Project Engineer at the Centre for Electromagnetics of CSIR-National Aerospace Laboratories, Bangalore, where she worked on RCS studies and conformal arrays.Dr. Rakesh Mohan Jha was Chief Scientist & Head, Centre for Electromagnetics, CSIR-National Aero space Laboratories, Bangalore. Dr. Jha obtained a dual degree in BE (Hons.) EEE and MSc (Hons.) Physics from BITS, Pilani (Raj.) India, in 1982. He obtained his Ph.D. (Engg.) degree from Department of Aerospace Engineering of Indian Institute of Science, Bangalore in 1989, in the area of computational electromagnetics for aerospace applications. Dr. Jha was a SERC (UK) Visiting Post-Doctoral Research Fellow at University of Oxford, Department of Engineering Science in 1991. He worked as an Alexander von Humboldt Fellow at the Institute for High-Frequency Techniques and Electronics of the University of Karlsruhe, Germany (1992-1993, 1997). He was awarded the Sir C.V. Raman Award for Aerospace Engineering for the Year 1999. Dr. Jha was elected Fellow of INAE in 2010, for his contributions to the EM Applications to Aerospace Engineering. He was also the Fellow of IETE and Distinguished Fellow of ICCES. Dr. Jha has authored or co-authored several books, and more than five hundred scientific research papers and technical reports. He passed away during the production of this book of a cardiac arrest.