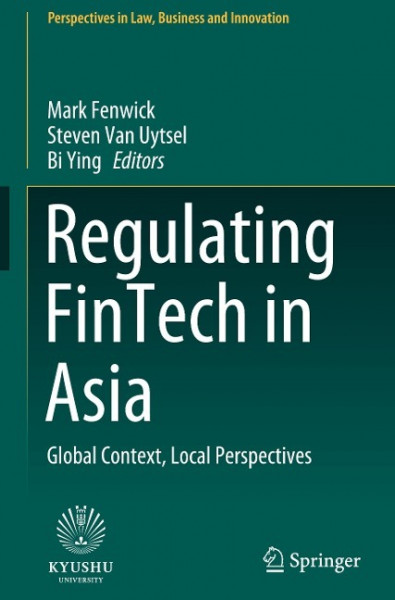 This book focuses on Fintech regulation in Asian, situating local developments in broader economic, regulatory and technological contexts. Over the last decade, Fintech - broadly defined as the use of new information technologies to help financial institutions and intermediaries compete in the marketplace - has disrupted the financial services sector. Like other 21st century technological developments, Fintech is a global phenomenon that plays out in local economic, political and regulatory contexts, and this dynamic interplay between global trends and local circumstances has created a complex and fast-changing landscape. Diverse stakeholders (most obviously incumbent financial service providers, tech start-ups and regulators) all pursue a competitive edge against a background of profound uncertainty about the future direction and possible effects of multiple emerging technologies. Compounding these difficulties are uncertainties surrounding regulatory responses. Policymakers often struggle to identify appropriate regulatory responses and increasingly turn to policy experimentation. Such issues add to the challenges for the various actors operating in the Fintech space. This situation is particularly fluid in Asia, since many jurisdictions are seeking to establish themselves as a regional hub for new financial services. von Fenwick, Mark

Mark Fenwick is a Professor of International Business Law at the Faculty of Law, Kyushu University, Fukuoka, Japan. His primary research interests are in the fields of disruptive innovation and business regulation in a digital age. His recent publications include New Technology, Big Data & the Law (Springer, 2017); The Shifting Meaning of Legal Certainty in Comparative & Transnational Law (Hart, 2017); Robotics, AI and the Future of Law (Springer, 2018: co-edited with Marcelo Corrales and Nikolaus Forgo); International Business Law: Emerging Fields of Regulation (Hart, 2018); Smart Contracts, Blockchain & the Law (Springer, 2019). He holds a master's and Ph.D. from the Faculty of Law, University of Cambridge (Queens' College), and has been a Visiting Professor at Duke University, the University of Hong Kong, Shanghai University of Finance & Economics, the National University of Singapore, Tilburg University and Vietnam National University.Steven Van Uytsel is a Professor of Competition Law at the Faculty of Law, Kyushu University, Fukuoka, Japan. He specializes in competition law, particularly enforcement issues and the position of competition law in countries in transition. More recently, he has focused on algorithmic pricing strategies and competition law, for which he received the Grant in Aid for Scientific Research (C), No. (April 2018-March 2021), Artificial Intelligence, Price Setting Strategies and Antitrust Law: Towards a Regulatory Framework. He has also developed an interest in the regulation of artificial intelligence for autonomous vehicles, for which he has been granted a Tsubasa research grant from Kyushu University. He has authored various publications, including Artificial Intelligence and Collusion: A Literature Overview in Robotics, AI and the Future of Law (Springer, 2019) and Digital Markets and the Response of the Japan Fair Trade Commission: The DeNA Co. Case, in Competition Law for the Digital Economy (Lundqvist ed., Edward Elgar, 2020). Bi Ying is an Associate Professor of International Economic Law at the Faculty of Law, Zhejiang University, Hangzhou, China. She holds an LL.B. and LL.M from the prestigious Tsinghua University, and an LL.D. degree from Kyushu University. Her research interests include WTO law and the regulation of state-owned enterprises. She is the author of, amongst others, Dumping: Antidumping Law or Competition Law (Intellectual Property, Intellectual Property Press, 2011) and Beat or Join? The Challenges of China's Asian Infrastructure Investment Bank to the US and Japan (China and WTO Review (2016) vol.2).