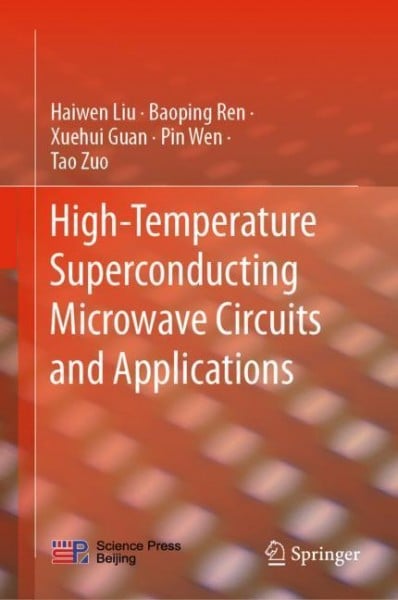 High-temperature superconducting (HTS) materials are becoming more and more attractive in the context of designing RF/microwave filters because of their lower losses and excellent performance. This book focuses on the superconducting microwave filter and its application in modern communication. It first presents the basic principles, HTS materials and processing and then introduces several types of multi-band HTS bandpass filter (BPF), discussing their properties and analyzing equivalent circuit models and their performances. This book is a valuable resource for students and researchers who are interested in wireless communication and RF/microwave design. von Liu, Haiwen

Prof. Dr. Haiwen Liu received the B.S. degree in electronic system and the M.S. degree in radio physics from Wuhan University, Wuhan, China, in 1997 and 2000, respectively, and two Ph.D. degrees in microwave engineering from Shanghai Jiaotong University, China, in 2004, and from Saitama University, Japan, in 2016, respectively. From 2004 to 2006, he was with Waseda University, Japan, as a research assistant professor. From 2006 to 2007, he was a research fellow with Kiel University, Germany, granted by the Alexander von Humboldt Research Fellowship, Germany. From 2007 to 2008, he was a professor with Institute of Optics and Electronics, Chengdu, China, supported by 100 Talents Program of Chinese Academy of Sciences. Since 2009, he is a chair professor with East China Jiaotong University, Nanchang, China. In 2014, he was a visiting scholar in Duke University, USA. In 2015, he was a visiting professor in University of Tokyo, supported by JSPS invitation fellowship, Japan. In 2016, he was a visiting professor in City University of Hong Kong.His current research interests include electromagnetic modeling of high-temperature superconducting circuits, RF and microwave passive circuits and systems, synthesis theory and practices of microwave filters and devices, antennas for wireless terminals, and radar system. He has published more than 100 papers in international and domestic journals and conferences. He has served as a Technical Program Committee (TPC) member for many international conferences and the reviewer for some international journals including IEEE Transactions on Microwave Theory and Technique, IEEE Transactions on Applied Superconductivity, IEEE Transactions on Industrial Electronics, IEEE Transactions on Components, Packaging and Manufacturing Technology, IEEE Microwave and Wireless Components Letters, IEEE Antennas and Wireless Propagation Letters. He is the recipient of Wang Kuancheng Science Foundation (2008), the Best Paper Prize of 2005 International Conference on Communications, Circuits and Systems Proceedings(Hong Kong), the Prize of Osaka City Mayor of Conference of Chinese Alumni in Japan (2005), the 100 Best Ph.D Dissertations in Shanghai, China (2006), National distinguished Ph.D student Scholarship, China (2003), National First-class GuangHua Education Scholarship, China (2002), and Huawei Co. Scholarship, China (1999).