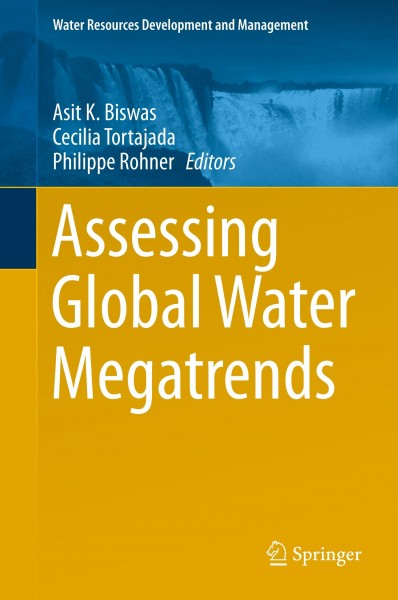 This book highlights what are likely to be the future megatrends in the water sector and why and how they should be incorporated to improve water governance in the coming decades. In this first ever book on megatrends for the water sector, 22 leading world experts from different disciplines representing academia, business, government, national and international organisations discuss what the major megatrends of the future are and how they will radically change water governance in the coming decades. von Biswas, Asit K. und Tortajada, Cecilia und Rohner, Philippe

Prof. Asit K. Biswas is universally acknowledged as one of the world's leading authorities on water and environmental management. He is co-founder of the Third World Centre for Water Management in Mexico and currently the Distinguished Visiting Professor at the Lee Kuan Yew School for Public Policy in Singapore. Formerly Professor in UK, Canada and Sweden, he was member of the World Commission on Water, and a founder of the International Water Resources Association and World Water Council. He has been senior advisor to 20 governments, six Heads of United Nations Agencies, two Secretary-Generals of OECD, and many other major international and national organizations. He is Past President of the International Water Resources Association and is founder and co-chair of the Club of Tokyo. Among his numerous awards are Crystal Drop and Millennium Prizes of the International Water Resources Association; Walter Huber Prize of the American Society of Civil Engineering. He received the Stockholm Water Prize, considered to be the Nobel Prize for area of water, for 'his outstanding and multi-faceted contributions to global water resource issues;' Person of the Year Award from Prime Minister Harper of Canada; Aragon Environment Prize of Spain; 'Excellence Award for Achievements' from New Global Indian Foundation; 'Hind Rattan Award' (Jewel of India). Reuters named him as one of the top 10 water trailblazers of the world. He was selected by the Impeller magazine as a 'true global water hero', and was named the world's second most influential water industry leader by Water and Wastewater International of UK. Prof. Biswas was a member of the Global Agenda Council of the World Economic Forum and is currently member of the International Advisory Board, Pictet Investments, Geneva; member of the Advisory Board, Indian Institute of Technology, Kharagpur; and Strategic Advisor, Singapore International Water Week. He advises Chairman of the Board or CEOs of four major multinational companies which are listed within the first 50 of the Global 500 companies, on corporate strategies, technological issues and social responsibilities. Prof. Biswas is the founder of the International Journal of Water Resources Development and was its Editor-in-Chief for its first 29 years. He has authored or edited 85 books and has published well over 650 scientific and technical papers. His work has now been translated into 38 languages. He is regular contributor to many national and international newspapers on resource and development related issues and also is a television commentator in three continents. ¿Dr. Cecilia Tortajada is Senior Research Fellow, Institute of Water Policy, Lee Kuan Yew School of Public Policy, National University of Singapore. The main focus of her work at present is on the future of the world's water, especially in terms of water, food, energy and environmental securities through coordinated policies. She has been an advisor to major international institutions like FAO, UNDP, JICA, ADB, OECD and GIZ, and has worked in countries in Africa, Asia, North and South America and Europe on water and natural resources and environment-related policies. She is a member of the OECD Initiative in Water Governance. She is a past President of the International Water Resources Association (2007-2009) and an Honorary member of the IWRA. Editor-in-Chief of the International Journal of Water Resources Development, Associate Editor of Water International, and member of the Editorial Boards of the International Journal of Water Governance, Journal of Natural Resources Policy Research, Urban, Planning and Transport Research Journal and Journal on Frontiers in Environmental Science; and Editor of book series with Oxford University Press and Springer. She is the author and editor of more than 30 books by major international publishers. Her work has been translated into Arabic, Chinese, French, German, Japanese and Spanish languages. In 2017 she received the Crystal Drop Award of the International Water Resources Association  Philippe Rohner joined Pictet Asset Management in 2002 and he is a Senior Investment Manager. Philippe is co-manager of Pictet's Water funds. Previously he was at Pictet, as an Equity Analyst in the Institutional Brokerage Services (now Helvea SA) starting in 1998.  He began his career as a Chemical Engineer at Texaco's Port Arthur Research Labs (Air & Water Conservation Dept). Then he joined Ciba-Geigy where he held managerial positions in R&D and Manufacturing both in Switzerland and the UK. As Investor Relations Manager, he was part of the task force in the successful spin-off of Ciba Specialty Chemicals as part of the Ciba-Geigy and Sandoz merger. Philippe holds a Ph.D from the Swiss Federal Institute of Technology (ETH), an MBA Degree from the University of Strathclyde and completed post graduate courses in Environmental Engineering from the University of Texas.