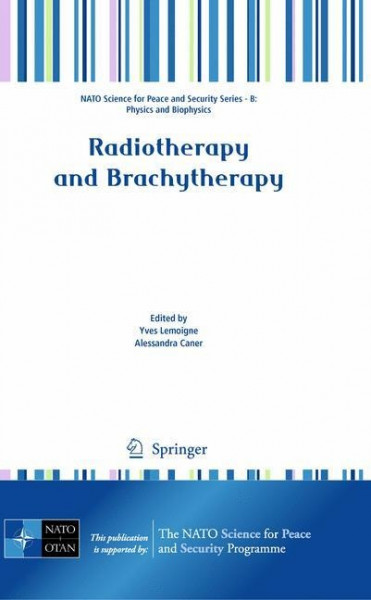 This book reports the majority of lectures given during the NATO Advanced Study Institute ASI-982996, which was held at the European Scientific Institute of Archamps (ESI, Archamps - France) from November 15 to November 27, 2007. The ASI course was structured in two parts: the first was dedicated to what is often called "teletherapy", i. e. radiotherapy with external beams, while the second focused on internal radiotherapy, also called "brachytherapy" or "curietherapy" in honour of Madame Curie who initiated the technique about a century ago. This ASI took place after the European School of Medical Physics, which devoted a 3 week period to medical imaging, a subject complementary to the topics of this book. Courses devoted to nuclear medicine and digital imaging techniques are collected in two volumes of the NATO Science Series entitled "Physics for Medical Imaging Applications" (ISBN 978-1-4020-5650-5) and "Molecular imaging: computer reconstruction and practice" (ISBN 978-1-4020- 8751-6). Every year in autumn ESI organises the European School of Medical Physics, which covers a large spectrum of topics ranging from Medical Imaging to Radiotherapy, over a period of 5 weeks. Thanks to the Cooperative Science and Technology sub-programme of the NATO Science Division, weeks four and five were replaced this year by the ASI course dedicated to "Physics of Modern Radiotherapy & Brachytherapy". This allowed the participation of experts and students from 20 different countries, with diverse cultural background and p- fessional experience. von Lemoigne, Yves und Caner, Alessandra