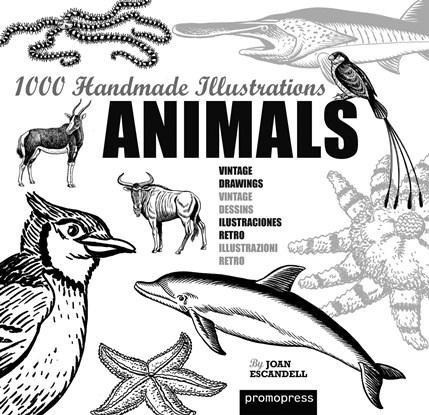 Animals - 1000 Handmade Illustrations features an outstanding selection of beautiful, timeless black and white illustrations by the talented visual artist Joan Escandell. Contemporary, yet with a nostalgic retro flavour, this title draws on classic styles from various eras, evoking the particular mood and atmosphere of the old, with an intriguing modern twist. The book is structured according to the different species and animal families. This book is in fact a royalty-free clipart library for professional practitioners, comic and design students as well as drawing enthusiasts of any level. Joan Escandell (Ibiza, 1937) is one of the most outstanding comic book authors of the 20th century in Spain. He worked for the celebrated publisher Bruguera. His drawings illustrated dozens of legendary characters in hugely popular young adults books from the 1960s on. In Europe, he has illustrated the first eco-friendly series 'Antares' in France (1975-1990), and 'He-Man' in Germany. He also contributed to Disney productions such as'Cinderella', 'The Lion King', 'Hercules' or 'Pocahontas'.