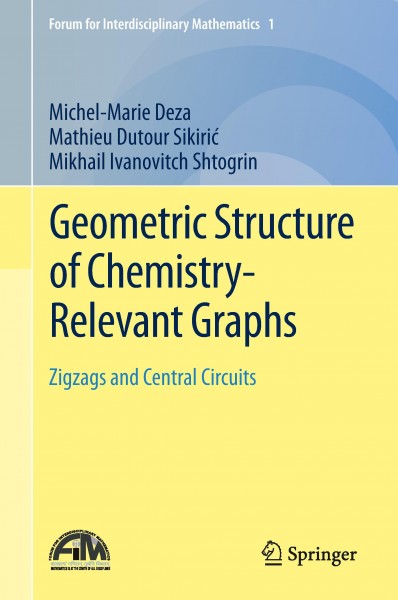 The central theme of the present book is zigzags and central-circuits of three- or four-regular plane graphs, which allow a double covering or covering of the edgeset to be obtained. The book presents zigzag and central circuit structures of geometric fullerenes and several other classes of graph of interest in the fields of chemistry and mathematics. It also discusses the symmetries, parameterization and the Goldberg-Coxeter construction for those graphs.It is the first book on this subject, presenting full structure theory of such graphs. While many previous publications only addressed particular questions about selected graphs, this book is based on numerous computations and presents extensive data (tables and figures), as well as algorithmic and computational information. It will be of interest to researchers and students of discrete geometry, mathematical chemistry and combinatorics, as well as to lay mathematicians. von Deza, Michel-Marie und Dutour Sikiric, Mathieu und Shtogrin, Mikhail Ivanovitch

MICHEL-MARIE DEZA is former research director at the French National Research Centre and Ecole Normale Supérieure, Paris. Earlier, he was research professor at the Japan Advanced Institute of Science and Technology. He is author of about 300 research publications on discrete geometry, combinatorics and their applications to chemistry and crystallography. He is also author of 7 books on mathematics, including popular Geometry of Cuts and Metrics and Encyclopedia of Distances, both published by Springer. MATHIEU DUTOUR SIKIRIC a senior associate researcher of Institute Rudjer Boskovic in Zagreb, Croatia. He is author of 70 articles and 2 books in the fields of science and engineering: mathematics, computer science, physics, chemistry, crystallography, oceanography and meteorology. His mathematical work concerns graph theory, polytope theory, tiling and their applications, geometry of numbers, and computational topology.MIKHAIL IVANOVICH SHTOGRIN is a leading research associate of Steklov Institute of Mathematics in the Russian Academy of Sciences, Moscow, Russia. He is author of over 120 research publications and 2 books on discrete geometry and geometric crystallography.