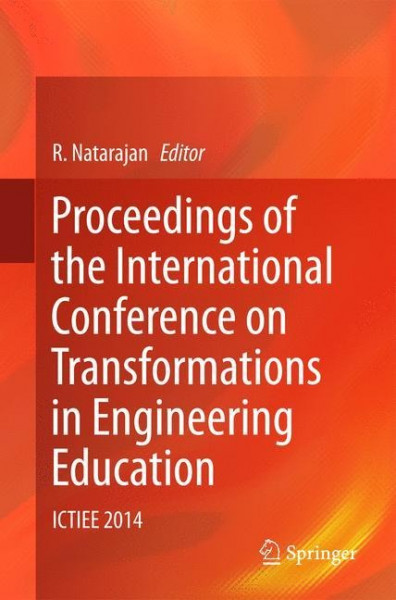 Proceedings of the International Conference on Transformations in Engineering Education

Editor R. Natarajan received his ME degree from the Indian Institute of Science, Bangalore; and his MASc and PhD degrees from the University of Waterloo, Canada. He has worked as a National Research Council Fellow in Canada, and as a Humboldt Research Fellow in Germany. He served as Director of the Indian Institute of Technology, Madras from 1995 to 2001 and as the Chairman of the All India Council for Technical Education, a statutory body of the Government of India, from 2001 to 2004. He was the Vice President of The Indian National Academy of Engineering during 2002-2006, and the Chairman of the Research Council of the Central Fuel Research Institute, Dhanbad during 1995-2005. He is currently the Chairman of the Board for IT Education Standards of Karnataka. He is a Fellow of Indian National Academy of Engineering, Indian Society for Technical Education, National Academy of Social Sciences, and Institution of Engineers (India). He has been conferred Honorary Doctorate Degrees by University of South Australia, Jawaharlal Nehru Technological University, Kanpur University, Nagarjuna University, Purvanchal University (U.P.) and NIT, Agartala. He has been a Member of the Editorial Boards of many prestigious journals including Fuel, Fuel Science and Technology, and Indian Journal of Technical Education. He is currently on the Editorial Board of the Journal of Engineering Education, published by the American Society for Engineering Education (ASEE). Co-editors Krishna Vedula is Professor of Chemical Engineering and Dean Emeritus, Francis College of Engineering, University of Massachusetts, Lowell. Dr. Vedula is currently founder and executive director of the Indo-US Collaboration for Engineering Education (IUCEE) facilitated initially by ASEE. IUCEE has the objective of improving quality and global relevance of engineering education in India and US. For the past five years, IUCEE has facilitated interactions between several hundreds of US faculty and several thousands of Indian faculty. He has also been the President of International Federation of Engineering Education Societies (IFEES) from 2010 to 2012.Dr. Vedula is well recognized globally for his contributions to engineering education, research, administration, and outreach. He is internationally recognized for his research in processing and properties of materials for high temperature applications, with particular emphasis on powder processing and inter-metallic compounds. He has been made a Fellow of American Society for Metals (ASM) and a Fellow of the American Society for Engineering Education (ASEE) in recognition of these professional achievements. As dean of engineering at University of Massachusetts (1995-2003), he has demonstrated his leadership in building unique partnerships with businesses, K-12, state agencies, and other educational institutions. He was responsible for raising several millions of dollars for scholarships, endowments and facilities from private sources and for overseeing a significant improvement in the quality of students and faculty as well research and teaching facilities at the Francis College of Engineering. He is Founder of "Massachusetts STEM (Science Technology Engineering and Mathematics) Collaborative" aimed at increasing the number of students in the state interested in pursuing science and engineering. This has now evolved into a program of the State of Massachusetts. Dr. Vedula has B.Tech (IIT Bombay, 1967), M.S. (Drexel University, 1969) and Ph.D. (Michigan Tech University, 1980) degrees in Materials Engineering. He has 30 years of academic teaching and research experience in materials science and engineering as well as engineering administration, including 10 years as a faculty member at Case Western Reserve University, 5 years as chair of the materials science and engineering department at Iowa State University, and 8 years as dean of an engineering college at UMass Lowell. In addition he has spent 2 years managing federal research and educational programs. Ashok S. Shettar earned his PhD from the Indian Institute of Science, Bangalore (India). He has three decades of experience in Engineering Education. His conviction and systemic practice of OBE have taken his Institution to greater heights in India. He has the experience of acting as resource person in workshops on outcome-based education in local, regional and national levels in India. He is an active researcher in Engineering Education. Dr. Ashok Shettar is currently the Principal of BVB College of Engineering & Technology, Hubli, India.