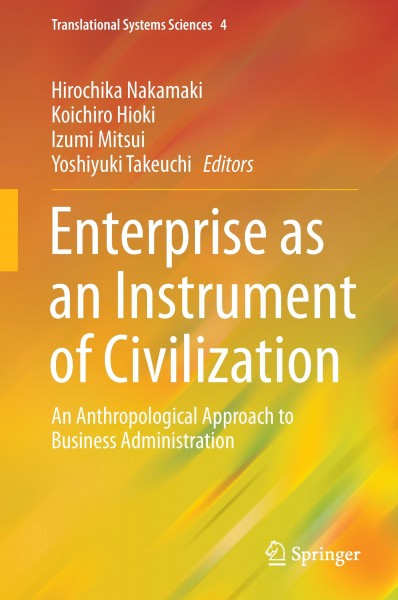 Enterprise as an Instrument of Civilization

In this book, the functions and dynamics of enterprises are explained with the use of anthropological methods. The chapters are based on anthropological research that has continued mainly as an inter-university research project, which is named Keiei Jinruigaku, of the National Museum of Ethnology (Japan) since 1993. These studies have a twofold aim: to clarify that enterprises are not only actors in economic activity but also actors that create culture and civilization; and to find the raison d'être of enterprises in a global society. Business anthropology is an approach to the investigation of various phenomena in enterprises and management using anthropological methodology (e.g., participant observations and interviews). Historically, its origin goes back to the 1920s-30s. In the Hawthorne experiments, the research group organized by Elton Mayo recruited an anthropologist, Lloyd W. Warner, and conducted research on human relations in the workplace by observation of participants. Since then, similar studies have been carried out in the United States and the United Kingdom. In Japan, however, such research is quite rare. Now, in addition to anthropological methods, the authors have employed multidisciplinary methods drawn from management, economics, and sociology. The research contained here can be characterized in these ways: (1) Research methods adopt interpretative approaches such as hermeneutic and/or narrative approaches rather than causal and functional explanations such as "cause-consequence" relationships. (2) Multidisciplinary approaches including qualitative research techniques are employed to investigate the total entity of enterprises, with their own cosmology. In this book, the totality of activities by enterprises are shown, including the relationship between religion and enterprise, corporate funerals, corporate museums, and the sacred space and/or mythology of enterprises. Part I provides introductions to Keiei Jinruigaku and Part II explains the theoretical characteristics of Keiei Jinruigaku. In addition, research topics and cases of Keiei Jinruigaku are presented in Part III. von Nakamaki, Hirochika und Hioki, Koichiro und Mitsui, Izumi und Takeuchi, Yoshiyuki