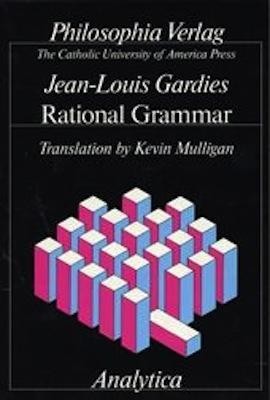 The ancient discipline of rational grammar has attracted more interest in the twentieth century than at any time since the Middle Ages. This book provides an introduction to the project of a rational grammar as it was sketched out by Husserl and partially developed by Lesniewski and Ajdukiewicz Besides investigating the nature of grammaticality, the distinction between logic and grammar and relation of grammatical structure to the communicative functions of language, the author sets out the basic syntactical structure of a large number of different grammatical phenomena These include names - proper names, common nouns and names of states of affairs - gender, mood, verbs, tense, aspect, adverbs and conjunctionsThe discussion concentrates on the level of grammatical coherence of well-formedness, differing in this respect from the more usual modern treatments in which the emphasis on semantic structure often leads to a neglect of grammatical structure.Of interest to:Linguists, logicians, philosophers, philologists.