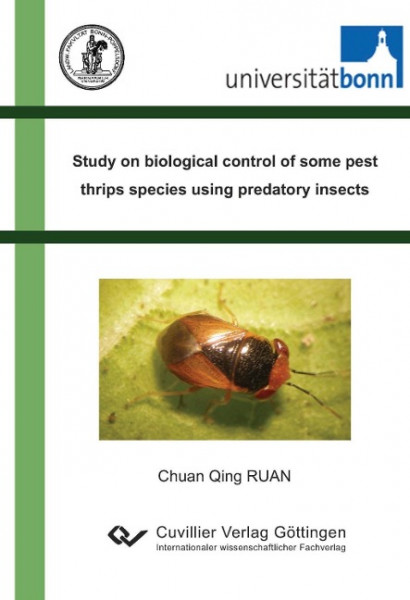 The current research aimed to study biological control of pest thrips Frankliniella occidentalis (PERGANDE) (Thy., Thripidae), Thrips tabaci LINDEMAN (Thy., Thripidae) and Gynaikothrips ficorum (MARCHAL) (Thy., Phlaeothripidae) using predatory bug species: Geocoris ochropterus FABR. (Het., Lygaeidae), Montandoniola moraguesi (PUTON) (Het., Anthocoridae), Orius similis ZHENG (Het., Anthocoridae) and Scipinia subula HSIAO et REN (Het., Reduviidae). Firstly, the biology and prey consumption of the four predatory bug species were experimented at temperature 25oC. In further research, G. ochropterus, which displayed high prey consumption, fecundity and long longevity, was selected to study its biology and prey consumption at temperatures 18 and 30oC. After that, its prey consumption in changing prey offer, the effect of extreme temperatures, its prey preference for prey ages and species, the effect of the different nutritions, as well as its cannibalism and the intraguild predation with O. similis were determined at temperature 25oC. Finally, greenhouse experiments were conducted to confirm the efficiency of G. ochropterus for the biological control of the pest thrips von Ruan, Chuan Quing

Chuan Qing RUAN: Male, Associate Professor from Institute of Agro-Biological Resources, Fujian Academic of Agricultural Science, Fuzhou, P. R. China. I was born on February 07, 1974, in the city of ZhouNing, Fujian, P. R. China. From 1992 to 1999, I was educated in the Department of Plant Protection, Fujian Agricultural University, Fuzhou, and graduated with bachelor and master degrees in Entomology and Pest Control. My bachelor dissertation was a computer-based diagnosis expert system of vegetable pests and their control. For the master degree, my dissertation was the study on artificial foods for the mass rearing of a parasitoid wasp, Anastatus japonicus Ashmead (Hymenoptera: Eupelmidae), which is a promising biological control agent against Litchi Sting Bug, Tessartoma papillosa Drury (Heteroptera: Pentatomidae). From the year of 1999 on, I work in the Institute of Agro-Biological Resources, Fujian Academic of Agricultural Sciences, and have been promoted as an Associate Professor in the institute. In this institute, my work focused on the study of Bacillus thuringiensis, including the resistance mechanism of insects against it and the improvement of its efficiency. From 2003 to 2009, I was a Ph.D. Student in the institute of INRES-Phytomedicine, Faculty of Agriculture, University of Bonn, Germany. My doctoral research was the study on biological control of some pest thrips species using predatory insects.