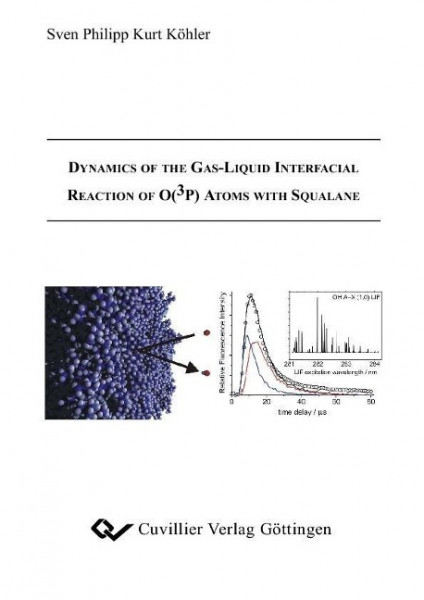 The dynamics of the gas-liquid interfacial reaction of O(3P) atoms with squalane, C30H62, have been investigated. O(3P) atoms were created by laser-photolysis of NO2 at 355nm above the liquid surface, and the main gas-phase products hydroxyl radicals detected under collision-free conditions using laser-induced ?uorescence.Thus it was possible to measure spectroscopically for the ?rst time the internal energy distribution of gas-phase products after reactive scattering on a gas-liquid interface. Vibrationally excited hydroxyl radicals were detected. This may imply that some O(3P) atoms abstract hydrogen from secondary and/or tertiary carbon atoms as it is known from related gas-phase experiments that primary hydrogen atoms do not produce measurable amounts of OH(v = 1). The rotational distribution in OH(v = 1) is colder than in OH(v = 0), indicative of a direct abstraction mechanism similar to the one observed in the gas-phase. However, it was also observed that the rotational temperature correlates in some cases with the temperature of the liquid itself. The translational energy distribution of the OH radicals was measured by recording time-of-?ight pro?les. These were modelled by Monte-Carlo simulations which only reproduced the pro?les well if two distinct translational energy components were considered. The combined results of the rotational and translational energy distributions indicate a twofold reaction mechanism. A direct and a thermal mechanism seem to contribute to the overall yield. Rotational distributions recorded at short time delays to discriminate against the thermal mechanism did not show a strong dependence on the surface temperature. Molecular dynamics simulations of the squalane-vacuum interface were performed using a slab of around 300 squalane molecules. The results show that the methyl groups are more likely to protrude into the vacuum than the methylene and methine groups. Additional simulations were performed which tracked the ?ight path of oxygen atoms towards some model liquid surfaces. These simulations revealed that secondary and tertiary hydrogen atoms are accessible to the incoming O(3P) atoms, rationalising the detection of OH/OD(v = 1).