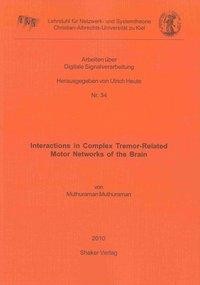 Interactions in Complex Tremor-Related Motor Networks of the Brain

Interactions in Complex Tremor-Related Motor Networks of the Brain

The complex human motor actions do not originate from fixed hierarchically organized motor centres but are governed by widely distributed and dynamically organized networks within the brain. It has been shown for different forms of tremor using electroencephalographie recordings from the human brain that different regions of the cerebral cortex are part of the oscillatory network producing tremor. One typical example is the Parkinsonian tremor. The Parkinsonian resting tremor is very regular with a typieal frequency between 3 and 6 Hz. However, in the power spectrum of the underlying rhythmic muscle activity, the peak is not onlyat the tremor frequency but also at twiee this frequency. In this theses three methods were used to test the hypotheses whether these two frequencies playa role in the generation of the motor networks in the brain or they are simple harmonics.