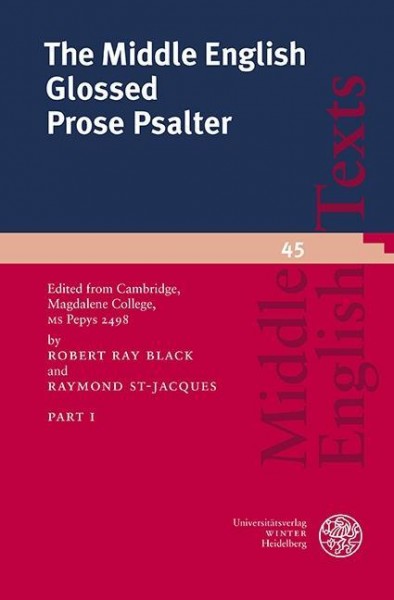 The 'Middle English Glossed Prose Psalter' is a fourteenth-century anonymous interlinear Latin-to-Middle English glossed prose translation of the 'Book of Psalms', eleven canticles, and the Athanasian Creed. One by one, each verse is written in Latin with an accompanying Middle English translation immediately following. Over one third of the Latin verses of the psalms and canticles in the four surviving manuscripts contain short, sometimes conspicuously Christian, glosses. This edition uses Cambridge, Magdalene College, MS Pepys 2498 as the base manuscript and includes variant Middle English readings from the other three manuscripts. The 'Middle English Glossed Prose Psalter' includes an edition of the glossed Latin as well as an edition of all of a French exemplar from Paris, Bibliothèque Nationale, MS fonds français 6260, a fifteenth-century copy of an earlier French text that appears to have influenced the Middle English translators. The edition is in two volumes, and contains a full introduction that includes an analysis of the language of the manuscripts by Jeremy J. Smith. In addition it contains commentaries on the Middle English, Latin, and French texts, three appendices, a select glossary, and bibliography. von Black, Robert Ray und St-Jacques, Raymo