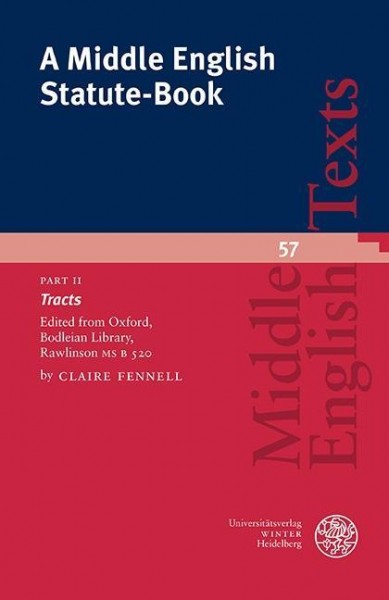 MET 57 is volume II of a two-volume edition of the early fourteenth-century 'Middle English Statute-Book' which survives in Oxford, Bodleian Library, Rawlinson MS B 520, the only known Middle English version of an early statute-book. Volume I (MET 44) edits the 'statuta' (ff. 1r-54v); volume II edits six tracts (ff. 54v-97r). The purpose of the statute-books containing the so-called 'statuta antiqua', dating from the years between 1225 and 1327, written in Latin, or Anglo-Norman, or a mixture of both, was to provide the owner with an up-to-date guide to the many new developments in the common law and law-court procedure that took place in particular during the first decades of Edward I's reign. The statutes, however, did not provide a comprehensive guide for the many sections of the population who had reason to frequent the law courts. For this reason, almost all statute-books include, in addition to the 'statuta' themselves, a number of contemporary common-law tracts of various lengths. Conventionally, these were grouped together after the 'statutes', which is the practice in Oxford, Bodleian Library, Rawlinson MS B 520. This volume contains an edition of the six tracts with an introduction, commentary, special glossary of legal terms and phrases, general glossary, bibliography, and an index that covers the two volumes. von Fennell, Claire