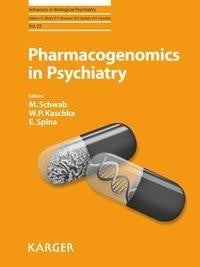 In recent years, there have been major developments in the fields of pharmacogenetics and pharmacogenomics, with the potential to make drug treatments in psychiatric medicine more effective. However, improvements in drug efficacy and tolerability, as well as finding the optimal dosage, can only be realized if in vivo mechanisms of drug action and ADME (absorption, distribution, metabolism, excretion) processes (pharmacokinetics) of psychopharmacological agents are better understood. In this volume, current progress and perspectives in pharmacogenetic testing of drug-metabolizing enzymes, drug transporters and other drug targets involved in the response to psychotropic agents are described extensively. This provides a timely overview of what has been achieved in the area of psychiatric pharmacogenomics alongside some promising directions and perspectives for future research. Psychiatrists, general medical doctors as well as pharmacologists and clinical pharmacologists will find new insights into the development and applications of pharmacogenomics in psychiatry. von Schwab, M. und Kaschka, W. P. und Spina, E.