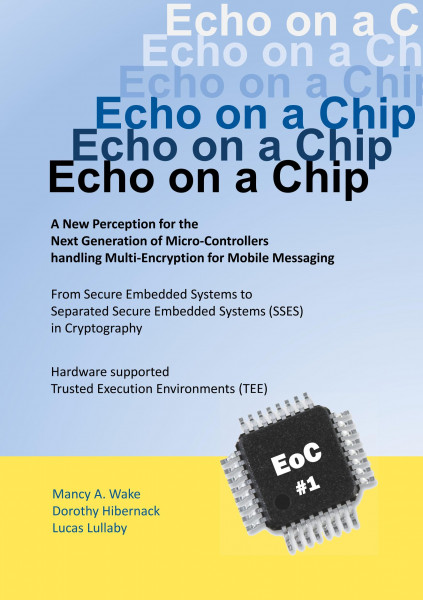 Echo on a Chip - Secure Embedded Systems in Cryptography

Based on the historical development of so-called Crypto Chips, the current Transformation of Cryptography shows numerous changes, innovations and new process designs in the field of Cryptography, which also need to be integrated in a hardware design of Microprocessors and Microcontrollers for a Secure Embedded System.Using the example of the encrypting Echo protocol, a design of a hardware architecture based on three Chips is presented: The central Echo Chip #1 represents a "Trusted Execution Environment" (TEE), which is not connected to the Internet for the conversion processes from plain text to cipher text and is supposed to remain quasi original, to prevent software injections or possible uploads of copies of the plain text. The technical specifications of all three microprocessors are described in detail.The established paradigm of separation is recognized as a security feature and discussed as a perception for a Next Generation of Microcontrollers in the field of Mobile Messaging under the technical term "Going the Extra Mile". This security architecture is then discussed in the context of seven different current risk cases with the consolidated result that the well-known OSI (Open Systems Interconnection) Model is expanded to the Secure Architecture Model, abbreviated SAM. von Wake, Mancy A. und Hibernack, Dorothy und Lullaby, Lucas

Mancy A. Wake is author of the book Echo on a Chip.