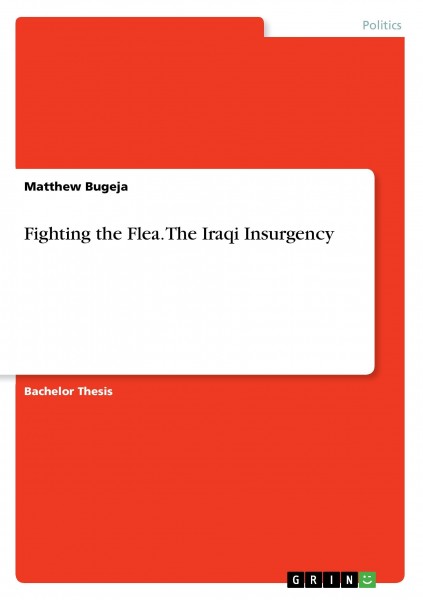 Fighting the Flea. The Iraqi Insurgency

Fighting the Flea. The Iraqi Insurgency

Bachelor Thesis from the year 2008 in the subject Politics - International Politics - Topic: Peace and Conflict Studies, Security, grade: 85/100, University of Malta, course: International Relations, language: English, abstract: The purpose of this research is to analyze and assess the 2003 invasion of Iraq and the subsequent insurgency that followed. The latter was a direct result of the Coalition's inability to come to terms with the various complexities of the country. This paper will look into the Iraq war's transformation from a conventional invasion, into an anti-occupation insurgency, as well as the Coalition's progress with dealing with the insurgency from its outbreak in 2003 to the most recent developments in early 2008.I had chosen this particular topic because being a Maltese-American, anything that either country does in its foreign policy is of direct interest to me - not only as a student of International Relations, but also as a citizen. The issue of Iraq has long been on the front pages of newspapers, and the top stories on the news on television. No matter what medium of the media you access, news about the situation Iraq is everywhere. I do not believe that one should simply sit back and watch the issues unfold with just as a means to pass the time, or worse, criticize without an ample knowledge of the facts. Rather, we should analyze and interpret the events that have occurred in Iraq and try to remedy the situation by evaluating every possible option to achieve stability in the country.The term 'fighting the flea' derives from a book written by Robert Taber, an investigative journalist, after witnessing first-hand Fidel Castro and his revolutionaries wage a successful insurgency against the Batista government in the mid-1950's and effectively take over the country. von Bugeja, Matthew