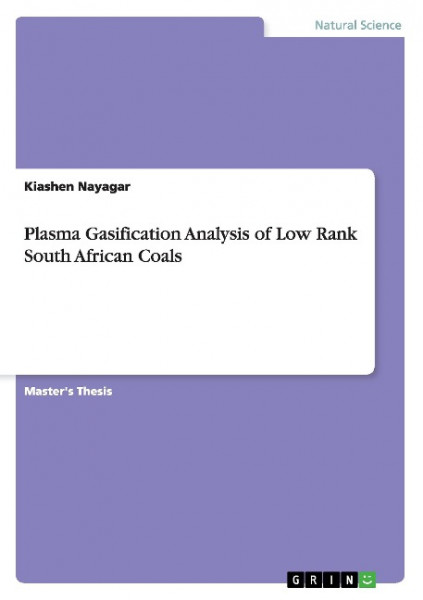 Master's Thesis from the year 2014 in the subject Chemistry - Bio-chemistry, , language: English, abstract: Plasma systems are designed to consistently exhibit much lower environmental levels of both air emissions and slag toxicity than other competing technologies. However, correct operating conditions of the plasma process can lead to an increased production rate and a more efficient process.A key feature of this work is to be able to predict the feed requirements and output compositions of a plasma gasification system using low grade South African coal. Furthermore, a graphical technique is proposed here that will represent regions in which gasification is feasible.A sample of low grade coal was analysed and used as basis. A theoretical model was developed that incorporates thqe Gibb's free energy minimization method and a bond equivalent diagram to predict the syngas composition as well as feed reactant requirements for optimal operation of a plasma gasifier.Experiments were conducted to validate the model at these optimum conditions. To prevent carbon deposition, at a temperature of 1600 K and a pressure of 1bar, the minimum required steam to carbon ratio is 1H2O : 0.28 C. The minimum steam to oxygen ratio is 1H2O : 1O2. The syngas analysis shows a compositionof: 45.2 % H2; 37.6 % CO; 8.5 % CH4; 8.4 % CO2 and 0.3 % N2.Plasma gasification plays a vital role in the mitigation of environmental concerns due to CO2 production. Gasification processes incorporate many reactions that are fairly complex to analyse making their design difficult to interpret. In this work, it is shown that the overall changes and product distributions, from a plasma gasification system, are severely limited by consideration of mass and energy balances only. The product distributions are constrained by basic gasification reactions and further limited to a plane or line by considering thermally balanced operations.It is shown, for low grade coal, that a sensible gasification operation occurs within a confined region where the product distributions can be determined without considerations to reactor kinetics, reactor design and operation. This analysis is an indispensable tool for process design and flowsheet development using gasification as an intermediate step. von Nayagar, Kiashen