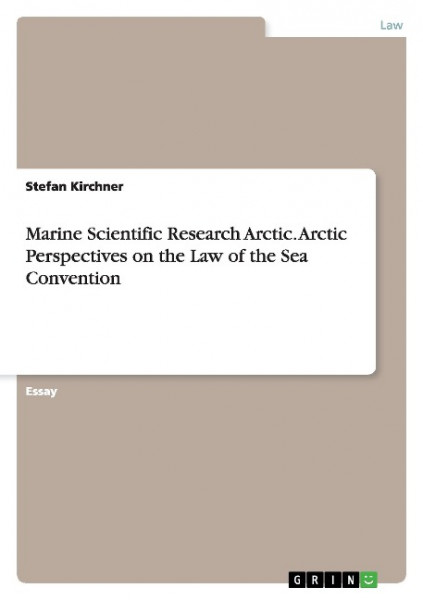 Marine Scientific Research Arctic. Arctic Perspectives on the Law of the Sea Convention

Marine Scientific Research Arctic. Arctic Perspectives on the Law of the Sea Convention

Essay from the year 2015 in the subject Law - European and International Law, Intellectual Properties, , language: English, abstract: This short essay introduces the reader to the aspects of the United Nations Convention on the Law of the Sea, often simply referred to as the Law of the Sea Convention (LOSC) which are often overlooked but which play a crucial role already today and which are bound to become more important in the future. Marine scientific research is no longer merely of academic interest. Oil, gas, fish and in the near future also natural resources at the sea bed are important economic factors. In particular in the Arctic Ocean, which is becoming more accessible due to climate change and the fast decline of the sea ice cover, competing claims to the sea provide new challenges. These conflicts include the territorial dispute between Denmark (which despite Greenland's increased autonomy retains control over the island's foreign affairs) and Canada over Hans Island, At the time the 1982 Convention was drafted, the idea that commercial mining of the Deep Sea Bed was just around the corner. While the technological development immediately after the adoption of the Law of the Sea Convention took longer than had been thought initially, advances in recent years have made deep sea mining a more realistic possibility. Indeed, several claims have been staked around the world. A distinction has to be made between claims to the Continental Shelf (which is not to be confused with the Deep Sea Bed) as an extension of the sovereignty of the state over the land on one hand and usage rights in parts of the Deep Sea Bed on the other.

RA Dr. Stefan Kirchner, MJI, is an international legal consultant, admitted to the bar in Germany (www.marine-consulting-eu). He has worked at the Law of the Sea Division of the German Foreign Ministry in Berlin and at the German Federal Maritime and Hydr