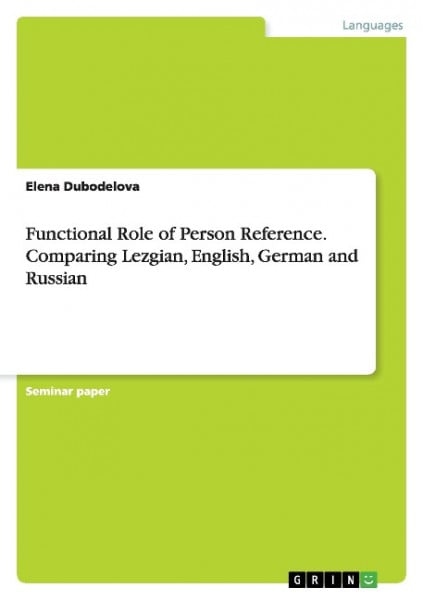 Seminar paper from the year 2002 in the subject Speech Science / Linguistics, grade: 2, Free University of Berlin (Institut für Englische Philologie), course: PS Pronominalsysteme in der Sprachen der Welt, language: English, abstract: According to Kremer (1997: 30), reference to people is mostly made by using full, lexical noun phrases, proper names and pronouns. With regard to linguistic gender, nouns and pronouns are closely related. In fact, Greenberg's implicational universal No. 43 is: ¿If a language has gender categories in the noun, it has gender categories in the pronoun` (1966:96). Pronouns, which are always mentioned as one of the traditional word classes, represent a very heterogeneous collection of `closed-class words with nominal function` (Quirk et al. 1985:335).The Lezgian is spoken by about 400,000 people in southern Daghestan and northern Azerbaijan in the eastern Caucasus. Lezgian has been written since 1928, first in the Latin alphabet, from 1938 onward in the Cyrillic alphabet. The grammar, which I used describes the standard language, which is based on the lowland Güne dialect. Lezgian is a member of the Lezgic branch of the Nakho-Daghestanian family of languages. The family tree of Nakho-Daghestanian is shown in (1) (following Hewitt 1981 a:197). von Dubodelova, Elena