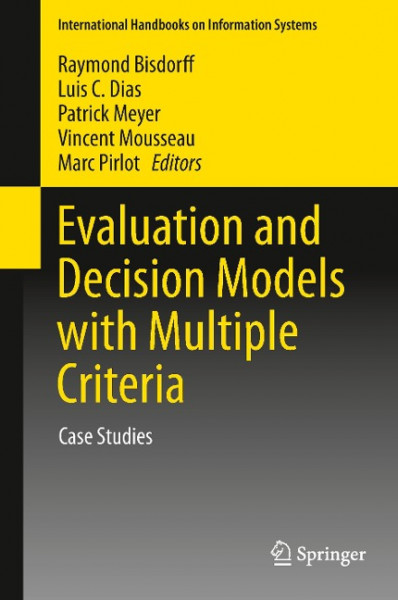 This book showcases a large variety of multiple criteria decision applications (MCDAs), presenting them in a coherent framework provided by the methodology chapters and the comments accompanying each case study. The chapters describing MCDAs invite the reader to experiment with MCDA methods and perhaps develop new variants using data from these case studies or other cases they encounter, equipping them with a broader perception of real-world problems and how to overcome them with the help of MCDAs. von Bisdorff, Raymond und Dias, Luis und Mousseau, Vincent und Pirlot, Marc und Meyer, Patrick

Raymond Bisdor¿ holds a Degree in Business Administration from the Uni­versity of Liège, Belgium (1975), a PhD in Operations Research (supervisor Prof. B. Roy) from the University Paris-Dauphine (1981) and a PhD in Man­agement Sciences from the University of Liège, Belgium (2002). He is since 2003 full professor of Applied Mathematics and Computer Science at the University of Luxembourg, where he teaches courses on algorithmic decision theory, multiple criteria decision aiding, computational statistics and discrete mathematics. He served the international OR community as president of ORBEL -the Belgian OR society (2008-2010), vice-president of EURO the Association of European OR Societies (1997-2000) and vice-president of IFORS -the International Federation of OR Societies (2005-2007). His main research interest is focused on outranking based decision aiding algorithms for selecting, ranking, sorting or rating, and clustering with multiple in­commensurable performance criteria. His major articles appeared in EJOR, Computers & OR, 4OR and in JMCDA.Luis C. Dias obtained a Degree in Informatics Engineering from the School of Science and Technology at the University of Coimbra in 1992, a PhD in Management by the University of Coimbra in 2001, and a Habilitation degree in Decision Aiding Science in 2013 in the same university. He is currently a tenured Assistant Professor at FEUC (School of Economics at the University of Coimbra), which he joined in 1992, where he has been teaching courses on decision analysis, operations research, informatics, and related areas. He is also a researcher at the INESC Coimbra R&D Institute a member of the coordination board of U.Coimbra's Energy for Sustainability Initiative. His research interests include multicriteria decision analysis, performance assessment, group decision and negotiation support, decision support systems, and applications in the areas of energy and environment. His publications include over 40 articles in peer-reviewed international journals.Patrick Meyer obtained a Degree in Mathematics from the University of Liège in 1999, a PhD in Mathematics and Engineering Sciences jointly from the University of Luxembourg and the Faculty of Engineering of Mons in 2007 and, in 2013, a Habilitation degree in Computer Science from the University Paris-Dauphine. He is currently Associate Professor at Télécom Bretagne, where he teaches courses on operational research, multicriteria decision aiding (MCDA) and algorithmics. He is a researcher in the Lab-STICC CNRS laboratory (UMR 6285), where he is also co-responsible of the DECIDE research team. His research interests include the modeling of the MCDA process and the development of tools to support it, group decision making and applications of MCDA to real world decision problems, as well as its promotion in other research domains, as, e.g., economics. Moreover, he is the author or co-author of 23 scienti¿c publications.Vincent Mousseau obtained a Degree in Computer Science (1989) and a PhD (1993) from Université Paris Dauphine. He received habilitation from Université Paris Dauphine in 2003. He was assistant professor at Université Paris Dauphine (1994-2008), and is now full professor at Ecole Centrale Paris (2008-). He heads the research team on "Decision Aid for Produc­tion/Distribution Systems" in the Industrial engineering laboratory (Ecole Centrale Paris). He is president of the Decision Deck Consortium. His research interests include Multiple Criteria Decision Aid, Preference Modelling and Elicitation, Group Decision Making, Spatial Decision Making. He authored or co-authored more than 50 scienti¿c publications.Marc Pirlot holds a Degree in Mathematics from Université Libre de Bruxelles and a PhD in Mathematics from Université de Mons-Hainaut (1981). He has been teaching operations research, statistics and decision analysis at the Faculty of Engineering, University of Mons, since 1989. He served as president of ORBEL, the Belgian OR society (1996-1998) and as principal editor of its journal JORBEL (1992-2002). He is the author or co-author of over 80 scienti¿c publications and 3 books, which mainly focus on multicriteria decision analysis, preference modelling, multi-objective optimization and metaheuristics. He has also been involved in applied research projects with the industry and the public sector.