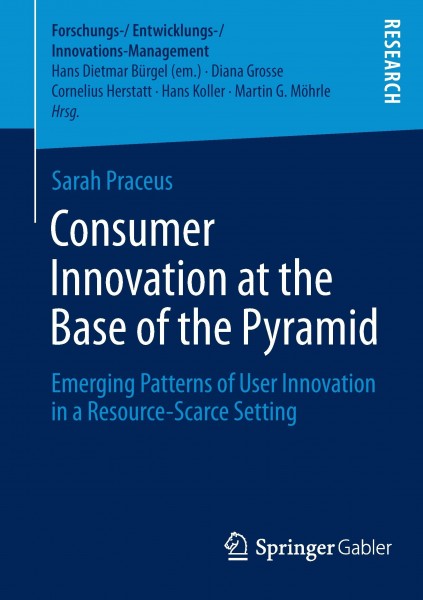 Consumer Innovation at the Base of the Pyramid

Approximately one-third of the world's population lives in poverty at the global Base of the economic Pyramid (BoP). Sarah Friderieke Praceus quantitatively investigates patterns and characteristics of a large sample of innovations developed by people living at the BoP in India. Differences and commonalities versus consumer innovations from the developed world are assessed and effects of innovation-relevant resources and contextual factors on the innovative outcomes are examined. The findings indicate that poor consumer innovators and their wealthier counterparts share similar stable demographic predispositions and preferences while the phenomenon adapts to the specific resource-scarce context and different living conditions at the BoP. Finally, user innovation research from developed markets appears not to be entirely transferable to subsistence markets. von Praceus, Sarah

Sarah Praceus obtained her doctorate at the Institute for Technology and Innovation Management at the Hamburg University of Technology (TUHH).