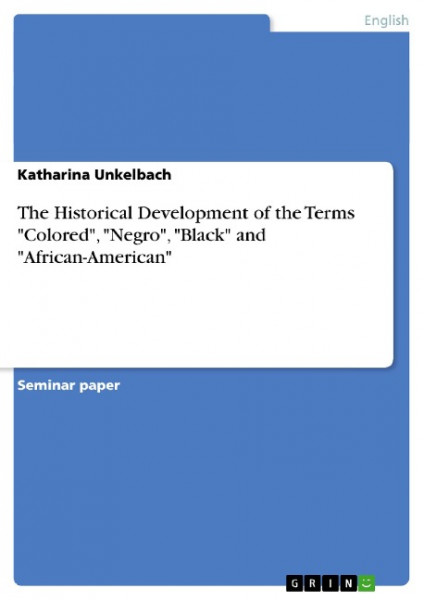 The Historical Development of the Terms "Colored", "Negro", "Black" and "African-American"

The Historical Development of the Terms "Colored", "Negro", "Black" and "African-American"

Seminar paper from the year 2012 in the subject American Studies - Linguistics, grade: 1,7, Johannes Gutenberg University Mainz, language: English, abstract: This paper is to demonstrate the diachronic development of the frequency the racial labels ¿Colored¿, ¿Negrö, ¿Black¿ and ¿African American¿ were used in the United States. I will point out that the changes in preference of racial notions are by no means an instance of coincidence. Thus, my aim is to retrace the varying connotations of the above-mentioned labels and their causes which are well-grounded in the historical, social and political living environment Blacks were faced with since they first arrived in the United States about 400 years ago. In consideration of the historical context, this paper aims to prove that the changing racial labeling is an effort of African Americans to redefine themselves in a society which consistently held them subordinate. von Unkelbach, Katharina