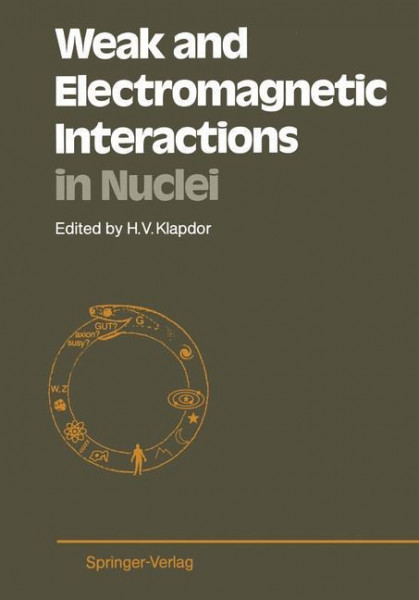 Weak and Electromagnetic Interactions in Nuclei

Weak and Electromagnetic Interactions in Nuclei
Proceedings of the International Symposium, Heidelberg, July 1-5, 1986

Nuclear physics is presently experiencing a thrust towards fundamental phy­ sics questions. Low-energy experiments help in testing beyond today's stan­ dard models of particle physics. The search for finite neutrino masses and neutrino oscillations, for proton decay, rare and forbidden muon and pion de­ cays, for an electric dipole moment of the neutron denote some of the efforts to test today's theories of grand unification (GUTs, SUSYs, Superstrings, ... ) complementary to the search for new particles and symmetries in high-energy experiments. The close connections between the laws of microphysics, astrophysics and cosmology open further perspectives. This concerns, to mention some of them, properties of exotic nuclei and nuclear matter, and star evolution; the neutrino and the dark matter in the universe; relations between grand unification and evolution of the early universe. The International Symposium on Weak and Electromagnetic Interactions in Nuclei (W.E.LN. 1986)' held in Heidelberg 1-5 July 1986, in conjunction with the 600th anniversary of the University of Heidelberg, brought together experts in the fields of nuclear and particle physics, astrophysics and cosmol­ ogy. von Klapdor, Hans Volker