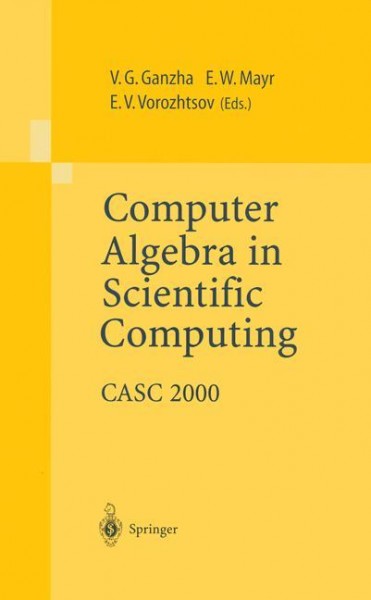 The vast area of Scientific Computing, which is concerned with the computer­ aided simulation of various processes in engineering, natural, economical, or social sciences, now enjoys rapid progress owing to the development of new efficient symbolic, numeric, and symbolic/numeric algorithms. There has already been for a long time a worldwide recognition of the fact that the mathematical term algorithm takes its origin from the Latin word algo­ ritmi, which is in turn a Latin transliteration of the Arab name "AI Khoresmi" of the Khoresmian mathematician Moukhammad Khoresmi, who lived in the Khoresm khanate during the years 780 - 850. The Khoresm khanate took sig­ nificant parts of the territories of present-day TUrkmenistan and Uzbekistan. Such towns of the Khoresm khanate as Bukhara and Marakanda (the present­ day Samarkand) were the centers of mathematical science and astronomy. The great Khoresmian mathematician M. Khoresmi introduced the Indian decimal positional system into everyday's life; this system is based on using the famil­ iar digits 1,2,3,4,5,6,7,8,9,0. M. Khoresmi had presented the arithmetic in the decimal positional calculus (prior to him, the Indian positional system was the subject only for jokes and witty disputes). Khoresmi's Book of Addition and Subtraction by Indian Method (Arithmetic) differs little from present-day arith­ metic. This book was translated into Latin in 1150; the last reprint was produced in Rome in 1957. von Ganzha, Viktor G. und Mayr, Ernst und Vorozhtsov, Evgenii