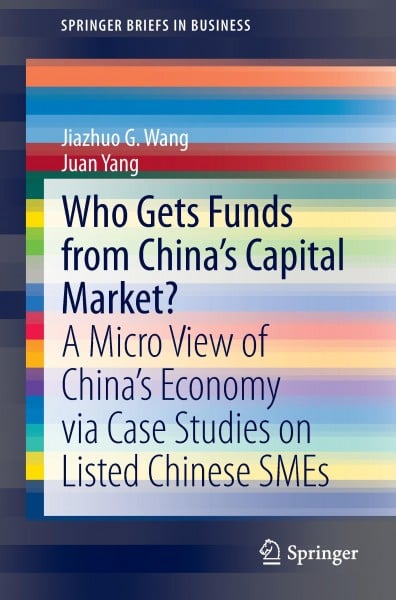 Who Gets Funds from China's Capital Market?

Who Gets Funds from China's Capital Market?
A Micro View of China's Economy via Case Studies on Listed Chinese SMEs

The subject of this book is an analysis of the business models developed or adopted by Chinese small and medium sized enterprises (SMEs), specifically those that are successfully listed on China's capital market; in other words, it is a dissection of those Chinese business models that have "worked." In China, there are over 10 million companies that are registered with China's State Industrial and Commercial Administration and over 40 million unregistered businesses. Among them, only about 1,000 companies became successfully listed on China's capital market and were able to obtain public funds from equity investors. This book takes a look at who these "lucky ones" were and what business models led to their success in a highly competitive Chinese market, investigations that will certainly be of interest to both Chinese and international readerships.In addition, this book provides a nuanced and micro view of the Chinese economy. As China's economy increasingly receives attention worldwide, the amount of research and publications on China's economy is also growing exponentially. However, the majority of these studies only focus on the macro level of the Chinese economy and aggregate variables such as GDP, growth rate, inflation, etc., while little research has been done at a micro and company level to analyze the Chinese economy. Thus, this book's focus on the case studies of representative firms may help fill some gaps in the study of business and the economy in China.Furthermore, this book hopes to dispel certain misconceptions about the nature of the Chinese economy. There is currently a stereotypical view about Chinese economy, for example that China, as the workshop of the world, primarily produces low-end products with low prices to be sold in other countries by budget retailers like Wal-Mart or dollar stores. While that is true to some extent, it is certainly not the whole story. The companies analyzed in this book cover a wide spectrum of industries including modern agriculture, alternative energy, resources recycling, mobile games, animation, luxury products, supply chain management, filmmaking and TV series production, displaying to readers the brand-new industrial structure of Chinese companies in the 21st century. von Wang, Jiazhuo G. und Yang, Jua