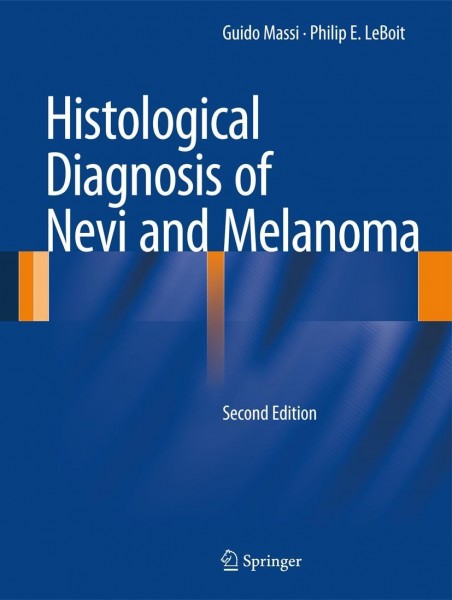 Histological Diagnosis of Nevi and Melanoma

Histological Diagnosis of Nevi and Melanoma

The interpretation of melanocytic tumors represents probably the most difficult task in the field of dermatopathology. The second edition of this text and atlas depicts a broad range of the most important and most challenging melanocytic lesions. Each individual case is illustrated with at least three high-quality color photographs and is commented on at length, highlighting the diagnostic clues. The goal of the authors is to assist the ordinary pathologist in making a precise workable diagnosis in their daily practice. They achieve this by providing simple criteria that will serve as a sound basis for an unequivocal diagnosis of either a benign or a malignant melanocytic neoplasm. The reader will find Histological Diagnosis of Nevi and Melanoma to be an invaluable guide to correct diagnosis even in difficult or rare cases. von Massi, Guido

Guido Massi, MD, graduated in Medicine and Surgery at the Catholic University School of Medicine, Rome, Italy in 1975 and subsequently obtained his Specialization in Pathology and Specialization in Dermatology from the same institution. He has been an Associate Professor of Pathology and Dermatopathology at the School since 1999. He is also Chief of the Surgical Pathology Laboratory (which mainly deals with dermatopathology) at the Complesso Integrato Columbus in Rome and Director of the Dermatopathology Section of Laboratorio Inghirami, Rome. Dr. Massi has been responsible for the organization of a number of international workshops and symposia on dermatopathology. He is the author or co-author of three previous books as well as many publications in peer-reviewed journals that address a wide range of dermatological conditions. Philip E. LeBoit, MD, studied at Albany Medical College, New York, before serving as a Resident in Pathology, Fellow in Dermatopathology, and Resident in Laboratory Medicine. Since 1997 he has been Professor of Pathology in the Departments of Pathology and Dermatology, University of California, San Francisco, where he is also Division Chief of the Dermatopathology Section and Co-director of the Dermatopathology Service. He has received various awards, including the A. Bernard Ackerman Lecture Award from the International Society of Dermatopathology and both the Herman Pinkus Memorial Lecture Award and Founders' Awards from the American Society of Dermatopathology. He is a member of various editorial boards, including of the American Journal of Dermatopathology (former editor in chief), American Journal of Surgical Pathology, Dermatology: Practical & Conceptual, skinnet.com, and Derm101.com. Dr. LeBoit was President of the International Society of Dermatopathology from 2007-10 and is a member of the UICC TNM Expert Panel on Skin Cancer. He is the first author or co-author of approaching 150 original articles as well as many editorials, review articles and book chapters.