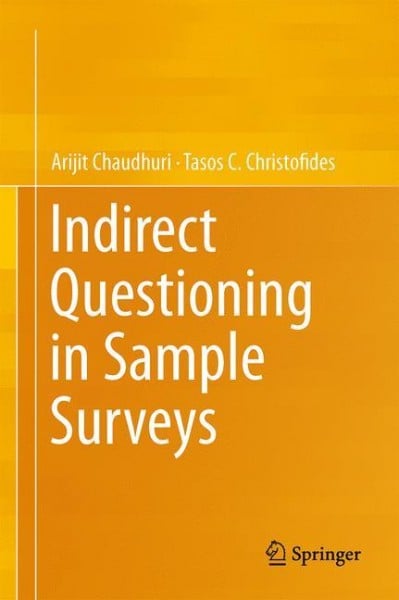 Indirect questioning is a crucial topic in surveys of human populations. When the issue is about a stigmatizing characteristic (for example about illegal drug use), standard survey methodologies are destined to fail because, as expected, people are not willing to reveal incriminating information or information violating their privacy.  Indirect questioning techniques have been devised so that the privacy of participants in a sample survey is protected and at the same time good estimates of certain parameters (e.g. the percentage of people in a certain community who use illegal drugs) can be delivered. The topic is modern and still under development.Indirect Questioning in Sample Surveys represents a collection of the most important and recent techniques of indirect questioning, including various versions of randomized response, the item count technique, the nominative technique, the three-card method, non-randomized response models and negative surveys, while also exploring the key aspect of protecting privacy. von Chaudhuri, Arijit und Christofides, Tasos C.

Professor Arijit Chaudhuri is currently an honorary visiting professor in the Applied Statistics Unit (ASU) at the Indian Statistical Institute (ISI), Kolkata, India (since 1 September 2005). He retired as a Professor from the ISI on 31 August 2002, where he then continued to work as a CSIR Emeritus Scientist for three years up to 31 August 2005. Professor Chaudhuri holds a Ph.D. in Statistics from Calcutta University, where he graduated. He worked as a Post-Doctoral Researcher for two years at the University of Sydney (1973-75). He worked on invitation with various assignments including Visiting Professorships at universities/statistical offices in the USA, Canada, England, Germany, the Netherlands, Sweden, Israel, Cyprus, Turkey, Cuba, and South Africa (for long durations during 1979-2009). He has successfully mentored 10 Ph.D. students. To date he has published over 150 papers in peer-reviewed journals, a few of them jointly with his students and colleagues. He is the author of more than six books on the field of survey sampling and in particular on randomized response.Tasos C. Christofides is a Professor at the Department of Mathematics and Statistics, the University of Cyprus. He completed his Ph.D. in Mathematical Sciences at Johns Hopkins University in 1987. From 1987 until 1991 he was an Assistant Professor in the Department of Mathematical Sciences at the State University of New York at Binghamton. In 1991 he joined the newly founded University of Cyprus and the Department of Mathematics and Statistics, becoming its first Chairman. His areas of expertise include indirect questioning techniques and probability inequalities. He serves on the editorial board of various journals of statistics. He has participated in a number of research projects and has provided consulting services for various organizations including the Statistical Service of Cyprus.