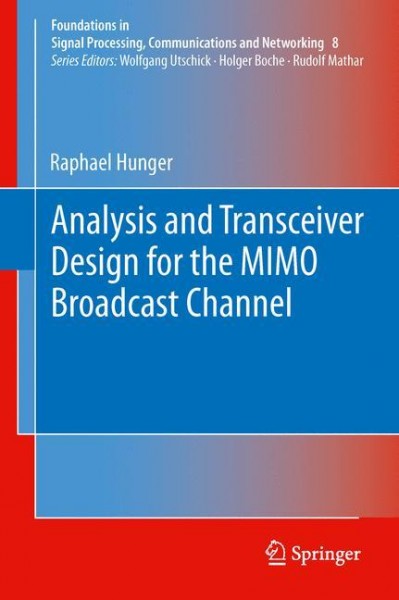 Analysis and Transceiver Design for the MIMO Broadcast Channel

Analysis and Transceiver Design for the MIMO Broadcast Channel

This book deals with the optimization-based joint design of the transmit and receive filters in   MIMO broadcast channel in which the user terminals may be equipped with several antenna elements. Furthermore, the maximum performance of the system in the high power regime as well as the set of all feasible quality-of-service requirements is analyzed.First, a fundamental duality is derived that holds between the MIMO broadcast channel and virtual MIMO multiple access channel. This duality construct allows for the efficient solution of problems originally posed in the broadcast channel in the dual domain where a possibly hidden convexity can often be revealed. On the basis of the established duality result, the gradient-projection algorithm is introduced as a tool to solve constrained optimization problems to global optimality under certain conditions. The gradient-projection tool is then applied to solving the weighted sum rate maximization problem which is a central optimization that arises in any network utility maximization. In the high power regime, a simple characterization of the obtained performance becomes possible due to the fact that the weighted sum rate utility converges to an affine asymptote in the logarithmic power domain. We find closed form expressions for these asymptotes which allows for a quantification of the asymptotic rate loss that linear transceivers have to face with respect to dirty paper coding.In the last part, we answer the fundamental question of feasibility in quality-of-service based optimizations with inelastic traffic that features strict delay constraints. Under the assumption of linear transceivers, not every set of quality-of-service requirements might be feasible making the power minimization problem with given lower bound constraints on the rate for example infeasible  in these cases. We derive a complete description of the quality-of-service feasibility region for  arbitrary channel matrices. von Hunger, Raphael