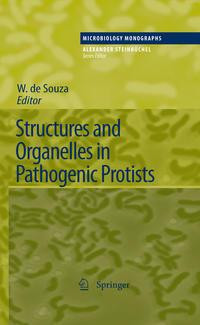 Structures and Organelles in Pathogenic Protists

Structures and Organelles in Pathogenic Protists

Parasitic protozoa, including some which are agents of human and veterinary diseases, display special cytoplasmic structures and organelles. Metabolic pathways have been discovered in these organelles which open up new possibilities for drug targets.This work presents reviews dealing with cytoskeletal structures such as the mastigont system found in trichomonads, the sub-pellicular microtubules in trypanosomatids and the paraflagellar rod. Further chapters cover structures involved in the synthesis, secretion and uptake of molecules, including the flagellar pocket of trypanosomatids, the reservosome of Trypanosoma and the megasome found in Leishmania, the traffic of vesicles in Entamoeba histolytica, secretory organelles and the secretory events of intestinal parasites during encystation. Reviews on special organelles, such as the kinetoplast-mitochondrion complex, the apicoplast found in Apicomplexa, the glycosomes in Kinetoplastida and the acidocalcisomes found in several protozoa complete the volume. von de Souza, W.