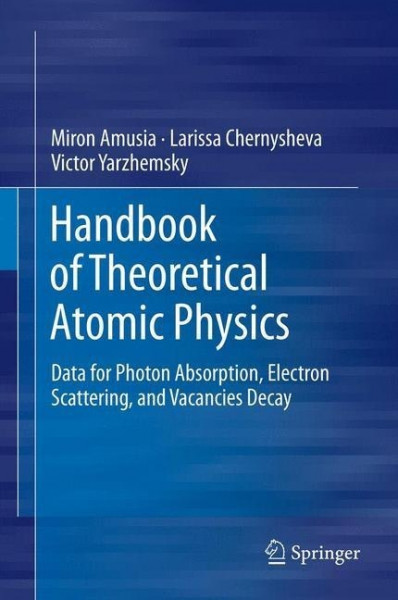 The aim of this book is to present highly accurate and extensive theoretical Atomic data and to give a survey of selected calculational methods for atomic physics, used to obtain these data. The book presents the results of calculations of cross sections and probabilities of a broad variety of atomic processes with participation of photons and electrons, namely on photoabsorption, electron scattering and accompanying effects. Included are data for photoabsorption and electron scattering cross-sections and probabilities of vacancy decay formed for a large number of atoms and ions. Attention is also given to photoionization and vacancy decay in endohedrals and to positron-atom scattering. The book is richly illustrated. The methods used are one-electron Hartree-Fock and the technique of Feynman diagrams that permits to include many-electron correlations. This is done in the frames of the Random Phase approximation with exchange and the many-body perturbation theory. Newly obtained and previously collected atomic data are presented. The atomic data are useful for investigating the electronic structure and physical processes in solids and liquids, molecules and clusters, astronomical objects, solar and planet atmospheres and atomic nucleus. Deep understanding of chemical reactions and processes is reached by deep and accurate knowledge of atomic structure and processes with participation of atoms. This book is useful for theorists performing research in different domains of contemporary physics, chemistry and biology, technologists working on production of new materials and for experimentalists performing research in the field of photon and electron interaction with atoms, molecules, solid bodies and liquids. von Amusia, Miron und Chernysheva, Larissa und Yarzhemsky, Victor