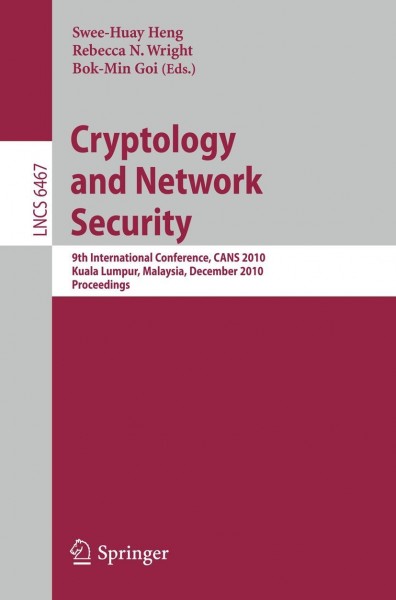 The 9th International Conference on Cryptology and Network Security (CANS 2010) was held in Kuala Lumpur, Malaysia during December 12-14, 2010. The conference was co-organized by the Multimedia University (MMU), Malaysia, and Universiti Tunku Abdul Rahman (UTAR), Malaysia. The conference received 64 submissions from 22 countries, out of which 21 were accepted after a careful and thorough review process. These proceedings also contain abstracts for two invited talks. All submissions were reviewed by at least three members of the Program Committee; those authored or co-authored by Program Committee members were reviewed by at least ?ve reviewers. P- gram Committee members were allowed to use external reviewers to assist with their reviews, but remained responsible for the contents of the review and r- resenting papers during the discussion and decision making. The review phase was followed by a 10-day discussion phase in which each paper with at least one supporting review was discussed, additional experts were consulted where needed, and ?nal decisions were made. We thank the Program Committee for their hard work in selecting the p- gram. We also thank the external reviewers who assisted with reviewing and the CANS Steering Committee for their help. We thank Shai Halevi for use of his Web-Submission-and-Review software that was used for the electronic s- mission and review of the submitted papers, and we thank the International Association for Cryptologic Research (IACR) for Web hosting of the software. von Heng, Swee-Huay und Wright, Rebecca N. und Goi, Bok-Mi