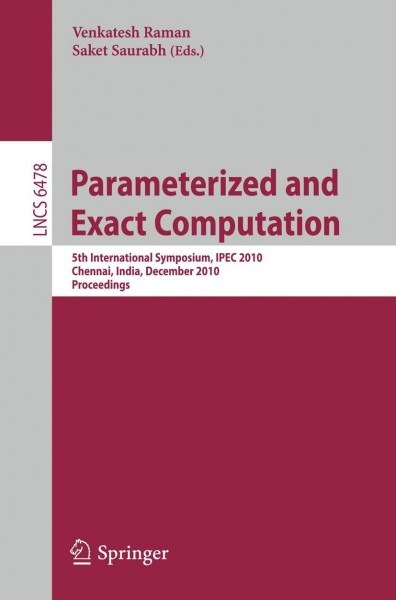 TheInternationalSymposiumonParameterizedandExactComputation(IPEC, formerly IWPEC) is an international symposium series that covers research in all aspects of parameterized and exact algorithms and complexity. Started in 2004 as a biennial workshop, it became an annual event from 2008. The four previous meetings of the IPEC/IWPEC series were held in Bergen, Norway(2004),Zu ¿rich,Switzerland(2006),Victoria,Canada(2008)andCop- hagen, Denmark (2009). On recommendations of the Steering Committee, from this year, the word 'symposium' replaces the word 'workshop' in the name, and it gets a new abbreviation IPEC (rhyming with the old one IWPEC). IPEC 2010 was the ?fth symposium in the series, held in Chennai, India, during December 13-15, 2010. The symposium was co-located with the 30th Foundations of Software Technology and Theoretical Computer Science conf- ence (FSTTCS 2010), a premier theory conference in India. At IPEC 2010, we had three plenary speakers: Anuj Dawar (University of Cambridge, UK), Fedor V. Fomin (University of Bergen, Norway) and Toby Walsh (NICTA and University of New South Wales, Australia). The abstracts accompanyingtheirtalksareincludedintheseproceedings.Wethankthespe- ers for accepting our invitation and for their abstracts. Inresponseto the callforpapers,32papersweresubmitted. Eachsubmission was reviewed by at least four reviewers. The reviewers were either Program Committee members or invited external reviewers. The Program Committee held electronic meetings using the EasyChair system, went through extensive discussions,andselected19ofthesubmissionsforpresentationatthesymposium and inclusion in this LNCS volume. von Raman, Venkatesh und Saurabh, Saket