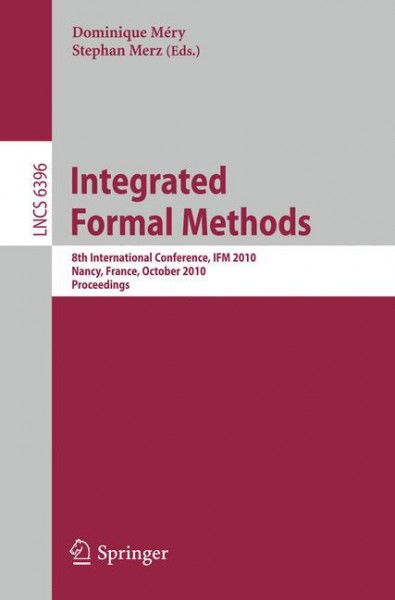 ThisvolumecontainstheproceedingsofIFM2010,the8thInternationalConf- ence on Integrated Formal Methods. The conference took place October 12-14, 2010,atthe INRIA researchcenterandthe LORIAlaboratoryinNancy,France. Previous editions were held in York, Dagstuhl, Turku, Canterbury, Eindhoven, Oxford, and Dusseldorf ¿ . The IFM conference series seeks to promote research into the combination of di?erent formal methods, including the combination of formal with semiformal methods, for system development. Such combinations are useful in order to apprehend di?erent aspects of systems, including fu- tional correctness, security, performance, and fault-tolerance. The conference provides a forum for discussing recent advances in the state of the art and for disseminating the results among the academic and industrial community. IFM2010received59submissions,coveringthespectrumofintegratedformal methods and ranging from formal and semiformal notations, semantics, re?- ment, veri?cation, and model transformations to type systems, logics, tools, and case studies. Each submission was reviewed by at least three members of the Program Committee. The committee decided to accept 20 papers. The conf- ence programalso included invited talks by Christel Baier, John Fitzgerald, and Rajeev Joshi. The conference was preceded by a day dedicated to the Wo- shop on Formal Methods for Web Data Trust and Security (WTS 2010)and two tutorials, one on the veri?cation of C# programs using Spec# and Boogie 2, + by Rosemary Monahan, and the other on the TLA proof system, by Denis Cousineau and Stephan Merz. von Méry, Dominique