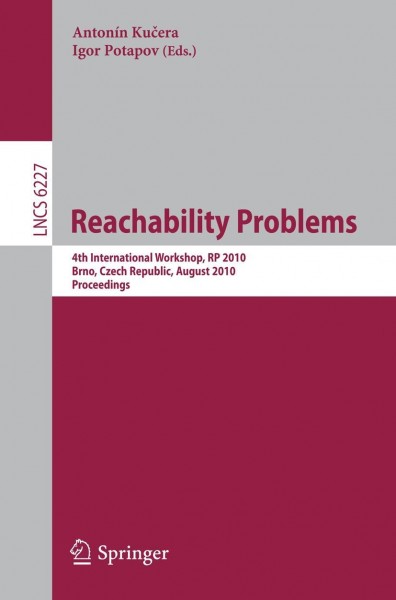 This volume contains the papers presented at the 4th International Workshop on Reachability Problems, RP 2010 held during August 28-29, 2010 in the F- ulty of Informatics, Masaryk University, Brno, Czech Republic and co-located with Joint MFCS and CSL 2010 (35th InternationalSymposiums on Mathem- ical Foundations of Computer Science and 19th EACSL Annual Conferences on Computer Science Logic). RP 2010 was the fourth in the series of workshops following three successful meetings at Ecole Polytechnique, France in 2009 at University of Liverpool, UK in 2008 and at Turku University, Finland in 2007. TheReachabilityProblemsworkshopsseriesaimsatgatheringtogethersch- ars from diverse disciplines and backgrounds interested in reachability problems that appearin algebraicstructures,computationalmodels, hybridsystems, logic and veri?cation, etc. Reachability is a fundamental problem in the context of many models and abstractions which describe various computational processes. Analysisofthecomputationaltracesandpredictabilityquestionsforsuchmodels can be formalized as a set of di?erent reachability problems. In general, reac- bility can be formulated as follows: Given a computational system with a set of allowed transformations (functions), decide whether a certain state of a system is reachable from a given initial state by a set of allowed transformations. The same questions can be asked not only about reachability of exact states of the system but also about a set of states expressed in terms of some property as a parameterized reachability problem. Another set of predictability questions can be seen in terms of reachability of eligible traces of computations,unavoidability ofsomedynamicsandapossibilitytoavoidundesirabledynamicsusingalimited control. von Kucera, Antonin und Potapov, Igor