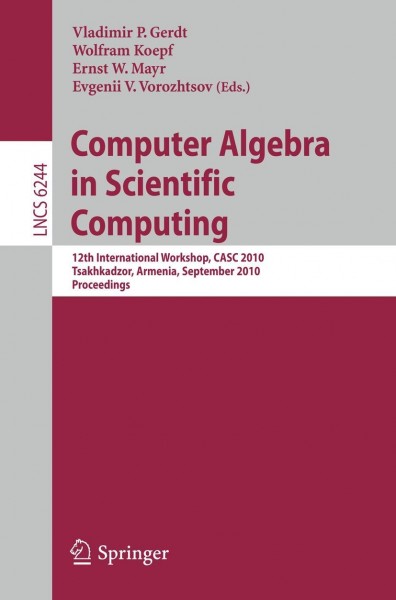 The CASC Workshops are traditionally held in turn in the Commonwealth of IndependentStates(CIS)andoutsideCIS(Germanyinparticular,but,attimes, also other countries with lively CA communities). The previous CASC Wo- shop was held in Japan, and the 12th workshop was held for the ?rst time in Armenia, which is one of the CIS republics. It should be noted that more than 35 institutes and scienti?c centers function within the National Academy of S- ences of Armenia (further details concerning the structure of the academy can be foundhttp://www. sci. am). These institutions are concerned, in particular, with problems in such branches of natural science as mathematics, informatics, physics, astronomy, biochemistry, etc. It follows from the talks presented at the previous CASC workshops that the methods and systems of computer algebra may be applied successfully in all the above-listed branches of natural sciences. Therefore, the organizers of the 12th CASC Workshop hope that the present workshop will help the Armenian scientists to become even more familiar with the capabilities of advanced computer algebra methods and systems and to get in touch with specialists in computer algebra from other countries. The 11 earlier CASC conferences, CASC 1998, CASC 1999, CASC 2000, CASC 2001, CASC 2002, CASC 2003, CASC 2004, CASC 2005, CASC 2006, CASC 2007, and CASC 2009 were held, respectively, in St. Petersburg (R- sia), Munich (Germany), Samarkand (Uzbekistan), Konstanz (Germany), Yalta (Ukraine), Passau (Germany), St. von Gerdt, Vladimir P. und Koepf, Wolfram und Mayr, Ernst W. und Vorozhtsov, Evgenii H.