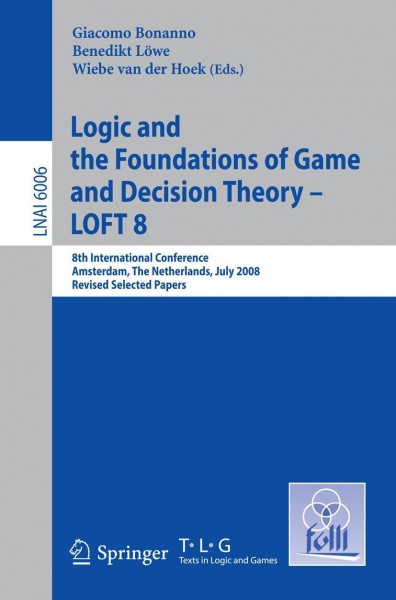 Logic and the Foundations of Game and Devision Theory - LOFT 8

This volume is conceived as a rami?cation of the eighth conference on Logic and the Foundations of the Theory of Games and Decisions (LOFT8), which took placein Amsterdam,inJuly2008.Inall,61papersweresubmitted to thisevent, of which 48 were presented. This volume is based on a selection of the presented papers and the invited talks: they survived a thorough and lengthy reviewing process. The LOFT conferences have been a regular biannual event since 1994. The ?rstconference washosted by the Centre Internationalde RecherchesMathe- tiques in Marseille (France),the next four took place at the InternationalCentre for Economic Research in Turin (Italy), the sixth conference was hosted by the Graduate School of Management in Leipzig (Germany), the seventh took place at the University of Liverpool (UK) and LOFT8 was organized at the ILLC in 1 Amsterdam. The LOFT conferences are interdisciplinary events that bring together - searchers from a variety of ?elds: computer science, economics, game theory, linguistics, logic, multi-agent systems, psychology, philosophy, social choice and statistics. Its focus is on the general issue of rationality and agency. In the last decade, there has been a ?oroushing activity in exactly the kind of areas that LOFT aims to address, which is demonstrated by not only the number of s- missions to LOFT8, but also the fact that the conference is becoming more and more a home for a large group of researchers, rather than a host for passersby from di?erent disciplines. von Bonanno, Giacomo und Löwe, Benedikt und Hoek, Wiebe van der