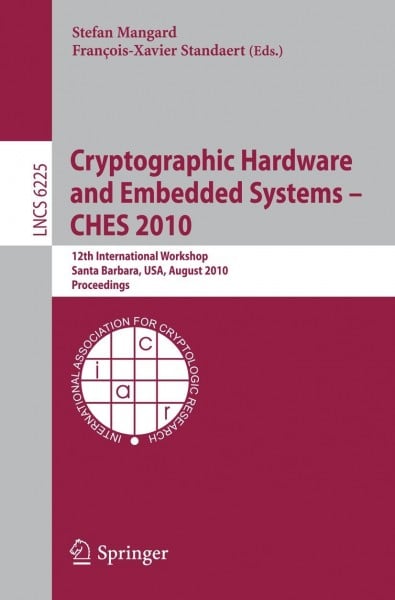 Since 1999, the workshop on Cryptographic Hardware and Embedded Systems (CHES) is the foremost international scienti?c event dedicated to all aspects of cryptographic hardware and security in embedded systems. Its 12th edition was held in Santa Barbara, California, USA, August 17-20, 2010. Exceptionally this year, it was co-located with the 30th International Cryptology Conference (CRYPTO). This co-location provided unique interaction opportunities for the communities of both events. As in previous years, CHES was sponsored by the International Association for Cryptologic Research (IACR). The workshopreceived 108 submissions, from 28 di?erent countries,of which the Program Committee selected 30 for presentation. Each submission was - viewed by at least 4 committee members, for a total of 468 reviews. Two invited talks completed the technical program. The ?rst one, given by Ivan Damg? ard and Markus Kuhn, was entitled "Is Theoretical Cryptography Any Good in Practice?", and presented jointly to the CRYPTO and CHES audiences, on Wednesday, August 18, 2010. The second one, given by Hovav Shacham, was entitled "Cars and Voting Machines: Embedded Systems in the Field. " The Program Committee agreed on giving a best paper award to Alexandre Berzati, C¿ ecile Canovas-Dumas and Louis Goubin, for their work "Public Key Perturbation of Randomized RSA Implementations. " These authors will also be invitedtosubmitanextendedversionoftheirpapertotheJournalofCryptology, together with the authors of two other contributions. First, Jean-Philippe - masson,LucaHenzen,WilliMeierandMar¿ ?aNaya-Plasencia,authorsof"Quark: aLightweightHash. "Second,LucaHenzen,PietroGendotti,PatriceGuillet,- rico Pargaetzi, Martin Zoller and Frank K. von Mangard, Stefan und Standaert, Francois-Xavier