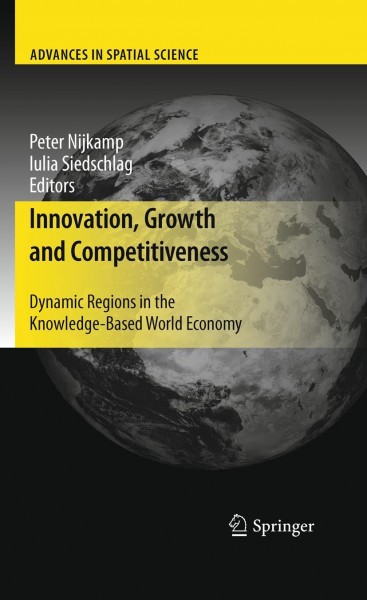 This book investigates dynamic regions in the context of greater global interaction in a world economy increasingly driven by knowledge and innovation. It offers novel empirical evidence on the underlying factors of the growth performance of these spaces. In particular, the following questions are addressed: What role is there for research, education and innovation in the development strategies of the dynamic growth regions? What are the risks and consequences of dynamic growth on patterns of world growth and development, competitiveness, inequalities, and convergence? What development strategies should be promoted at national and international levels to promote a growing and more sustainable world economy? What are the implications of the emerging new competitors for Europe's competitiveness? Using an innovative, integrated framework of analysis, the contributions in this book combine a wide array of complex theoretical and methodological approaches. von Nijkamp, Peter

Peter Nijkamp is Professor in Regional and Urban Economics and in Economic Geography at the VU University, Amsterdam. His main research interests cover quantitative plan evaluati¬on, regional and urban modelling, multicriteria analysis, transport systems analysis, mathe¬matical systems modelling, technological innovation, entrepreneurship, environmental and resource management, and sustainable development. In the past years he has focussed his research in particular on new quantitative methods for policy analysis, as well as on spatial-behavioural analysis of economic agents. He has a broad expertise in the area of public policy, services planning, infrastructu¬re manage¬ment and environmental protection. In all these fields he has publis¬hed many books and numerous articles. He is member of editorial/advisory boards of more than 30 journals. He has been visiting professor in many universities all over the world. According to the RePec list he belongs to the top-30 of well-known economists world-wide. He is past president of the European Regional Science Association and of the Regional Science Association International. He is also fellow of the Royal Netherlands Academy of Sciences, and past vice-president of this organization. From 2002 - 2009 he has served as president of the governing board of the Netherlands Research Council (NWO). In addition, he is past president of the European Heads of Research Councils (EUROHORCs). He is also fellow of the Academia Europaea, and member of many international scientific organizations. He has acted regularly as advisor to (inter)national bodies and (local and national) governments. In 1996, he was awarded the most prestigious scientific prize in the Netherlands, the Spinoza award. Iulia Siedschlag is Associate Research Professor and Head of the Centre for International Economics and Competitiveness at the Economic and Social Research Institute in Dublin. Her key areas of expertise include international and European economic integration; international trade and investment; economic growth in open economies, open economies macroeconomics; new technology diffusion, innovation and productivity; applied econometrics. Her research has been published in leading international journals and books. She has received several research awards from private and public organisations. She has been appointed as an international expert to the European Commission, European Central Bank, World Bank, Inter-American Development Bank, Asian Development Bank Institute, and the World Economic Forum. She has been awarded a significant number of research grants and projects involving European research organisations and universities.