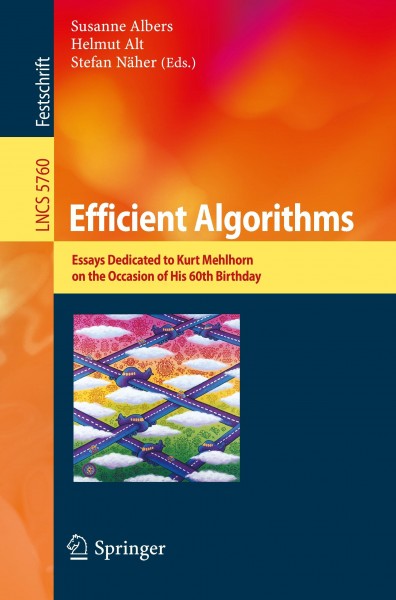 "E?ziente Algorithmen" was the title of the ?rst book by Kurt Mehlhorn in 1977. It was meant as a text for graduate students and published in German by Teubner-Verlag. We decided to adopt this title 32 years later for this Festschrift in honor of Kurt on the occasion of his 60th birthday. It contains contributions by his former PhD students, many of whom are now university teachers themselves, and colleagues with whom he cooperated closely within his career. It is our pleasure that even Kurt's former PhD advisor, Bob Constable from Cornell University,kindlyagreedtocontribute.Manyofthecontributionswerepresented at a colloquium held in Kurt's honor on August 27 and 28, 2009 in Saarbrücken, Germany. This Festschriftshowsclearlyhowthe ?eld ofalgorithmicshas developedand matured in the decades since Kurt wrote his book with the same title. The classic approach based on discrete mathematics and computability and complexity theory continues to be the foundation of the ?eld with ever new and important challenges as the ?rst chapters of this Festschrift show. Kurt has contributed signi?cantly to classical algorithmics and gained worldwide repu- tion. Starting from research in computability theory in his PhD thesis he made major contributions to complexity theory, graph algorithms, data structures, and was one of the ?rst to recognize the signi?cance of computational geometry contributing one of the early textbooks on the subject. von Albers, Susanne und Alt, Helmut und Näher, Stefa