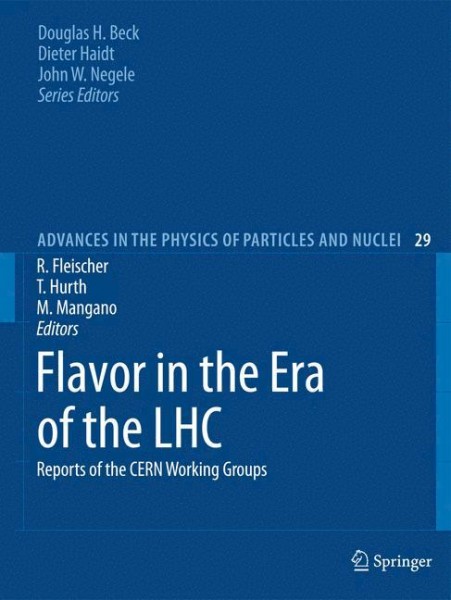 Flavor in the Era of the LHC

a R. Fleischer, T. Hurth, M. L. Mangano Physics Department, CERN, 1211 Geneva, Switzerland In the history of quantum and particle physics, discrete system. In this past decade, the key player has been the B-meson system, and we also witnessed the appearance on symmetries and their violation have played an outstanding + ? rôle. First, the assumption of the conservation of P (parity), stage of the top quark. Thanks to thee e B factories with C (charge conjugation), CP and CPT (T denotes time rever- their detectors BaBar (SLAC) and Belle (KEK), CP vio- tion is now also rmly seen in B-meson decays, where the sal) helped theorists to restrict theoretical predictions, such 0 "golden" decay B ?J/?K shows CP-violating effects as in Fermi's 1934 seminal paper on weak interactions. In S d at the level of 70%. These effects can be translated into the 1957, the observation of P (and C) violation in weak int- angle? of the "unitarity triangle" (UT), which characterizes actions gave a new impact and led to the conjecture that CP the Kobayashi-Maskawa mechanism of CP violation. S- was still a conserved symmetry. In 1963, one year before + ? eral strategies to determine the other angles of the triangle, the surprising observation of CP violation in K ?? ? L ? and ?, have been proposed and successfully applied to decays, the concept of quark- avour mixing was introduced theB-factory data. von Fleischer, Robert