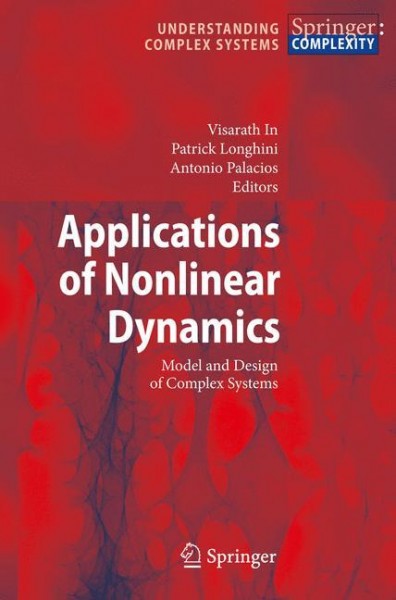 Applications of Nonlinear Dynamics
Model and Design of Complex Systems

The ?eld of applied nonlinear dynamics has attracted scientists and engineers across many different disciplines to develop innovative ideas and methods to study c- plex behavior exhibited by relatively simple systems. Examples include: population dynamics, ?uidization processes, applied optics, stochastic resonance, ?ocking and ?ightformations,lasers,andmechanicalandelectricaloscillators. Acommontheme among these and many other examples is the underlying universal laws of nonl- ear science that govern the behavior, in space and time, of a given system. These laws are universal in the sense that they transcend the model-speci?c features of a system and so they can be readily applied to explain and predict the behavior of a wide ranging phenomena, natural and arti?cial ones. Thus the emphasis in the past decades has been in explaining nonlinear phenomena with signi?cantly less att- tion paid to exploiting the rich behavior of nonlinear systems to design and fabricate new devices that can operate more ef?ciently. Recently, there has been a series of meetings on topics such as Experimental Chaos, Neural Coding, and Stochastic Resonance, which have brought together many researchers in the ?eld of nonlinear dynamics to discuss, mainly, theoretical ideas that may have the potential for further implementation. In contrast, the goal of the 2007 ICAND (International Conference on Applied Nonlinear Dynamics) was focused more sharply on the implementation of theoretical ideas into actual - vices and systems.