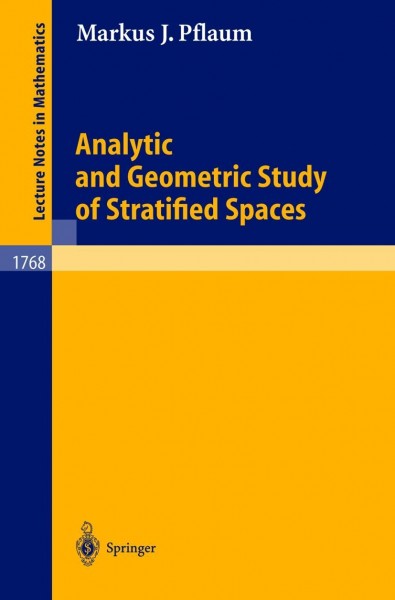 stratified collectionsofdiffer- inamore intuitive are Expressed terminology, spaces in This characteristic tiable manifoldswhich are an glued together appropriate way. of manifolds" feature becomes in the name or original "complexes [188] apparent of "manifold collections" See. HASSLERWHITNEY fora the by predecessor [189, 11) of stratified WHITNEY's article from the 1947 modern notion a [188] space. year the birth date of abstract of stratifications. Nev- can be as an theory regarded have considered before 1947 which mathematicians nowadays theless, already topics, of stratified like for at theend ofthe are treated within the theory spaces, example to when nineteenth when or century, algebraic geometers began study singularities and of varieties The interest in simplicialcomplexes triangulations algebraic began. of manifolds" in for the introduction of the so-called was reason "complexes [188] bounded submanifold of the observation that the of a some boundary noncompact lower dimensional Euclidean oftenbe in can decomposed locally finitelymany space inmodern manifolds. This ofviewhasbeentaken point again geometric analysis up and for instance forms the basis of the of a or a concept manifold-with-boundary manifold-with-corners for MELROSE or RENETHOM example [126, 127] 1.1.19). (see noticed in his work of 1955 that his iterated sets of of asmooth singularities [1661 f R' R' manifolds for certain functions and a : -4 are generic comprise mapping collection" inthe ofWHITNEY WHITNEY 1957in "manifold sense proved [190] [1891. von Pflaum, Markus J.