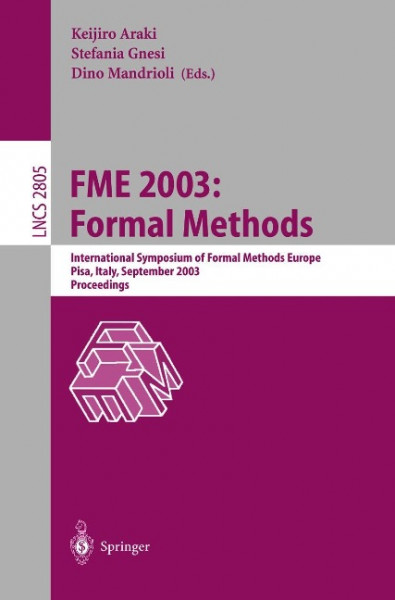 ThisvolumecontainstheproceedingsofFM2003,the12thInternationalFormal Methods Europe Symposium which was held in Pisa, Italy on September 8-14, 2003. Formal Methods Europe (FME, www. fmeurope. org) is an independent - sociation which aims to stimulate the use of and research on formal methods for system development. FME conferences began with a VDM Europe symposium in 1987. Since then, the meetings have grown and have been held about once - ery 18 months. Throughout the years the symposia have been notably successful in bringing together researchers, tool developers, vendors, and users, both from academia and from industry. Unlike previous symposia in the series, FM 2003 was not given a speci?c theme. Rather, its main goal could be synthesized as "widening the scope. " Indeed, the organizers aimed at enlarging the audience and impact of the symposium along several directions. Dropping the su?x 'E' from the title of the conference re?ects the wish to welcome participation and contribution from every country; also,contributionsfromoutsidethetraditionalFormalMethodscommunitywere solicited. The recent innovation of including an Industrial Day as an important part of the symposium shows the strong commitment to involve industrial p- ple more and more within the Formal Methods community. Even the traditional and rather fuzzy borderline between "software engineering formal methods" and methods and formalisms exploited in di?erent ?elds of engineering was so- what challenged. von Araki, Keijiro und Gnesi, Stefania und Mandrioli, Dio