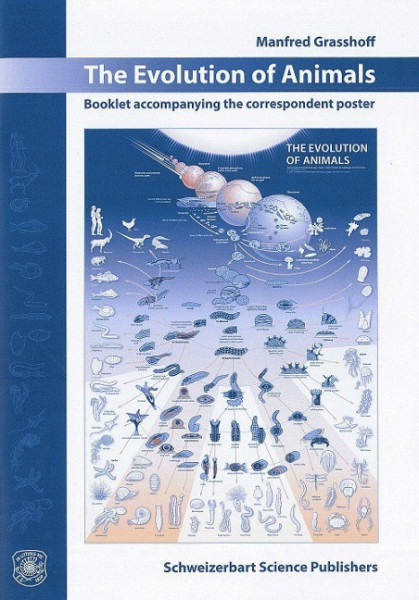 The Evolution of Animals

The Evolution of Animals
Booklet accompanying the correspondent poster

The wall poster "The Evolution of Animals” shows the change of body structure along on the main evolutionary lines of the animal kingdom. It is thus fundamentally different from traditional phylogenetic trees, which show a system of similarities as the course of evolution, but do not provide any explanation of how the change took place: how did ̀fish become four-legged land animals, how did reptiles become birds, what was the body architecture of the primordial animal from which all the main evolutionary lines could emerge? These are questions of evolutionary transformation, and man cannot find answers to them. The course of history cannot be read directly from something, not from similarities among animals, and not from the remains of extinct—fossil—animals. The course of history can only be reconstructed: one draws conclusions about what happened in the past from today's knowledge. This is true for any historical science, whether it deals with the history of mankind, the geological changes in The Earth, or the origin of the animal kingdom. The reconstructions of the evolutionary lines of the animal kingdom deal with body architecture, its mechanical conditions, and its gradual transformations. The evolutionary biologist Ernst Mayr stated that these reconstructions provide answers to the "why questions,” in that they explain why structures are the way they are. Mayr points out that these answers cannot be gained by describing and comparing characters. After having reconstructed a course of history—from today's knowledge backwards, so to speak—it can be told forwards as a running story. This is the purpose of the graphic design. It visualizes the most important transformations and the accompanying text tells their stories. And these stories are amazing, here and there almost unbelievable, and always fascinating. von Grasshoff, Manfred