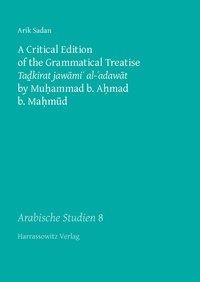 A Critical Edition of the Grammatical Treatise Tadkirat jawami' al-'adawat by Muhammad b. Ahmad b. Mahmud

A Critical Edition of the Grammatical Treatise Tadkirat jawami' al-'adawat by Muhammad b. Ahmad b. Mahmud

Medieval Arab scholars held grammar in a very high esteem due to two main reasons. First, intellectual curiosity led them to investigate the language and its structures. Secondly, the desire to better understand the holy text of the Qur'an made Arabic grammar indispensable. The intellectual curiosity as well as the interconnection between grammar and the sciences of religion can be seen in the grammarians' writings and theories in general and in particular in the hitherto unpublished - and virutally unknown - grammatical treatise Tadkirat jawami' al-'adawat ('memorandum of the many meanings of the particles'). As its title implies, it is mainly dedicated to Arabic grammar, but also contains chapters devoted to other topics, such as logic and rhetoric. Its author, Muhammad Ibn Ahmad Ibn Mahmud, discusses the structures and meanings of Arabic particles, as well as topics of grammar and other fields. He shows independent analyses and hardly quotes earlier grammarians. Almost all of the examples in Tadkirat jawami' al-'adawat are taken from the Qur'an. Arik Sadan publishes this important treatise for the first time. He presents a scientific critical edition that is based on eleven manuscripts from Germany, Iran, Israel, Slovakia and Turkey. von Sadan, Arik