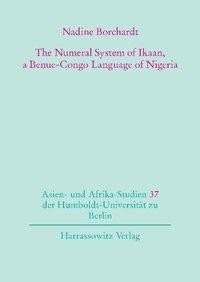 The Numeral System of Ikaan, a Benue-Congo Language of Nigeria

The Numeral System of Ikaan, a Benue-Congo Language of Nigeria

Ikaan is an endangered Benue-Congo language spoken in Nigeria with a particularly rich numeral system. The language, as well as its numeral system, are about to disappear with the next generation of speakers as they shift to the dominant language of the region, Yoruba. Nadine Borchard's study provides a comprehensive description of the Ikaan numeral system, based on data collected in Ikakumo where Ikaan is spoken. There are two major domains of investigation. First, the formation patterns of Ikaan numerals are investigated, detailing how, in the base '20' system of Ikaan, addition, multiplication and subtraction form higher numerals and which rules underlie these formation processes. Second, the diversity of the morphosyntax of Ikaan numerals is explored, determining the various parts of speech involved in Ikaan numerals and the way in which numerals interact with other constituents in a phrase. Additionally, Borchard aims to provide a holistic documentation of Ikaan numerals, describing their use in the speech community as well as their accompanying counting gestures. The structure of ordinals and distributives is also covered. On a typological level, the study shows which aspects of the Ikaan numeral system are typical and which are special, even violating some proposed universals on numerals. At the same time, it contributes to our understanding of numeral systems as it both provides data on a so-far unknown language system and constitutes an integrated analysis of a wide range of domains in a numeral system as a whole. von Borchardt, Nadine