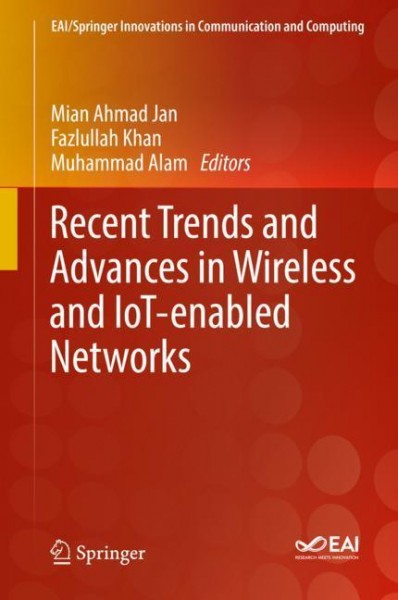 Recent Trends and Advances in Wireless and IoT-enabled Networks

Recent Trends and Advances in Wireless and IoT-enabled Networks

The book covers a variety of topics in Information and Communications Technology (ICT) and their impact on innovation and business. The authors discuss various innovations, business and industrial motivations, and impact on humans and the interplay between those factors in terms of finance, demand, and competition. Topics discussed include the convergence of Machine to Machine (M2M), Internet of Things (IoT), Social, and Big Data. They also discuss AI and its integration into technologies from machine learning, predictive analytics, security software, to intelligent agents, and many more. Contributions come from academics and professionals around the world. Covers the most recent practices in ICT related topics pertaining to technological growth, innovation, and business; Presents a survey on the most recent technological areas revolutionizing how humans communicate and interact; Features four sections: IoT, Wireless Ad Hoc & Sensor Networks, Fog Computing, and Big Data Analytics. von Jan, Mian Ahmad

Mian Ahmad Jan is an Assistant Professor at the Department of Computer Science, Abdul Wali Khan University Mardan, Pakistan. He holds a Ph.D. in Computer Systems from University of Technology Sydney, Australia. His research interests include cluster-based hierarchical routing protocols, congestion detection and mitigation and intrusion and malicious attack detections in wireless sensor networks, Internet and web of things. He has published his research in various prestigious IEEE Transactions, Springer and Elsevier Journals. Besides, he has published his work in numerous International Conferences as well. He has served on editorial board and guest editor for various prestigious journals. He is an active reviewer of numerous IEEE Transactions, and Elsevier and Springer journals.Fazlullah Khan is an Assistant Professor at the Department of Computer Science, Abdul Wali Khan University Mardan, Pakistan. Currently, he is pursuing his Ph.D. at the department of computer science, Abdul Wali Khan University Mardan, Pakistan. He has completed his MS in Information Engineering from the Faculty of Electrical Electronics & Information Engineering, at Nagaoka University of Technology (NUT) Japan. He has MS degree in Computer Software Engineering from National University of Sciences and Technology Islamabad, Pakistan. He was awarded gold medal in BS in Information Technology from the University of Peshawar, Pakistan. He had been the recipient of various prestigious scholarships during his studies. He was the recipient of MEXT scholarship for two years at NUT Japan. His research interests are cross layer signaling and performance analysis of Mobile Ad Hoc Networks, Vehicular Ad Hoc Networks, Cognitive Radio Networks, Wireless Sensor Networks, Wireless Sensor and Actor Networks, and Cognitive Radio Sensor Networks. Recently, he has been involved in latest developments in the field of Underwater Sensor Network Localization and Secured Ticketing, Internet of Vehicles security and privacy issues, Software-defined Radio VANET, Internet of Vehicles, and Big Data Analytics. He has published his research work in various IEEE and ACM/Springer International conferences and in the Institute of Electronics, Information and Communication (IEICE), Japan. Recently, he has been chair of various conferences and special sessions such as EAI Future5v-2017, IEEE CCODE-2017, EAI IoT-BC2. He has been invited to serve as a Technical Program Committee Member for various IEEE international conferences. He has been an active reviewer for high cited and highly ranked international journals, including Springer MONET, IET Wireless Sensor Systems, IEEE Communication Magazine, IEEE Transaction on ITS, and so on. Muhammad Alam holds a PhD degree in Computer Science from University of Aveiro, Portugal (2013-14) and has a MS degree in Computer Science from International Islamic university Islamabad, Pakistan. In 2009, he joined the Instituto de Telecomunicações - Aveiro (Portugal) as researcher and completed his Ph.D. from University of Aveiro with a specialization in Inter Layer and Cooperative Design Strategies for Green Mobile Networks. He has participated in several European Union FP7 projects such as Hurricane, C2POWER, ICSI, PEACE and Portuguese government funded projects such SmartVision. He has been working as senior researcher at Instituto de Telecomunicações and participating in European Union and Portuguese government funded projects. Currently, he is an assistant professor at Xi'an Jiaotong-Liverpool University (XJTLU), Suzhou, China. His research interests include IoT, Real-time wireless communication, 5G, Vehicular networks, Context-aware systems and Radio resource management in next generation wireless networks. He has authored/edited 3 books and over 100 publications in refereed journals and conferences as well as book chapters. He is the TPC member and reviewer for a number of reputed conferences, journals, and magazines. He is IEEE and IEEE IES senior member. He served as general co-chair of future 5V conference and also served as session chair in a number of reputed conferences such as IEEE IECON 2016, IEEE WFCS 2016, IEEE ITSC 2015. He also provided his services as guest editor to several journals.