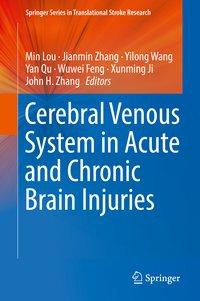 Provides important information from anatomy to pathophysiology and covers most neurological disorders that involve venous circulation. Venous circulation has not been extensively studied and we know relatively little about cerebral venous circulation. Venous circulation contributes to half of the brain circulation and about 70% of the blood in the brain is venous blood. Veins and venules play extremely important roles in brain circulation especially during pathologies such as brain edema, BBB disruption, elevation of intracranial pressure during and after ischemic and hemorrhagic stroke events, traumatic brain injury, neurodegerative disorders, in adults and newborns. Occlusion of veins or sinuses by thrombus, compression of veins and venules by tumor and edematous tissues, elevation of venous pressure during cranial hypertension, all lead to fatal insults such as venous infarction and hemorrhage. von Lou, Min